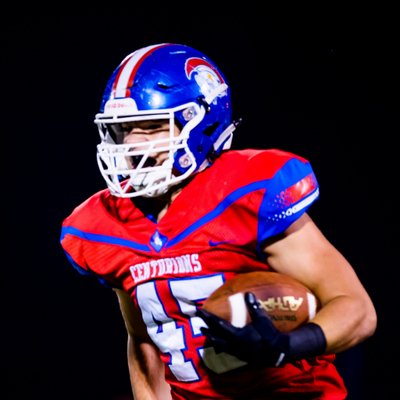 Twins are very competitive, or so I have been told. One would have to wonder how competitive it is around the Babin household in Louisville, Kentucky? We featured the twins in an article dated November 16, 2017 entitled My goodness there’s two of them… My understanding is Dr. and Mrs. Babin have thought the same thing many times over the years of their rearing.

Both of the twins, Brandt and Braeden Babin are two-time KPGFootball All-State Football players. Both of the Babins have starred for the Christian Academy-Louisville which has won a State title together with 26 of 29 football games with the Babins in the lineup. Now, both of the Babins have been invited to the region’s most prestigious combine, the Appalachia Prep Combine, convening in Charlotte, West Virginia, April 27, 2019.

Statistically speaking, Brandt, plays the sexier position if you will as it gets most of the offensive emphasis and attention, second only to being the QB. Brandt is a running-back, and that seems a pale description of what kind of player Brandt really is.

Consider this, Brandt, missing 4 games in 2018, still gained 1,012 yards on 136 carries and scored 15 rushing TDs upon coming back from injury. He also caught 14 passes from out of the backfield for 176 yards and a score. He was second on the team in scoring behind Milton Wright, with 96 points in only 11 of the 15 games. In the State Championship game against Mayfield, Brandt carried it 23-times for 176 yards rushing with 2 rushing TDs paired with 3 receptions for 42 additional yards receiving in an MVP-worthy effort.

Over his freshman campaign, Brandt gained 736 yards rushing on 125 attempts with 11 rushing TDs scored. Overall, this sophomore running back has gained 1,748 yards on the ground, via 261 carries, and scored 26 rushing TDs, while receiving 19 passes from out of the backfield for 232 yards and two scores over the two-year stint. How does one’s twin compete with that coupled with 2 straight selections to the KPGFootball underclassman All-State team?

Actually, quite well, thank you very much. Brandt is a 6-0, 205 pound cat-like athlete who “went crazy” defensively for the Centurions in 2018, as his highlights fairly demonstrate. First of all, Braeden is Brandt’s lead blocker so much of that offensive production of Brandt’s is attributable, in no small way, to his brother Braeden. Ask Brandt if this isn’t true and he will be the first to tell you. Secondly, Braeden is a star in his own right, defensively, with star-like statistical performance we can lean on to buttress this position.

Though considered “undersized” for what one expects of a NG, Braeden proved far too quick, in 2018, for most centers to block. There wasn’t a NG we saw this year impact games any more profoundly than Braeden Babin. Babin had 63 tackles with an incredible, drive-killing, 16 TFLs to lead his 15-0 football team. Babin also collected 8.5 QB sacks. That’s right, 8.5 sacks from a NG! Babin forced 2 fumbles and recovered 2 fumbles. All of this while remaining instrumental to his twin brother’s success running the football. Braeden, too, has been selected both his freshman and sophomore years to the KPGFootball underclassman All-State team.

As you can see, Braeden Babin is a bone fide football star. He’s the best NB/ILB combo player in the 2021 graduating class. He’s one of the premier fullbacks in the 2021 graduating class. He’s a two-time KPGFootball underclassman All-Stater. Now, he’s an invitee to the prestigious Appalachia Prep Combine. So, whatever else you may want to say Braeden either is or isn’t, one thing remains abundantly certain…Braeden is WAY more than just the other Babin.