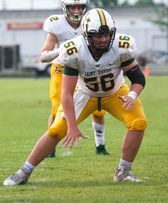 Cayden Grigsby (’24) from Middlesboro had quite a night quarterbacking the highly regarded Yellow Jackets in a key home win over Breathitt County. Grigsby completed 12 of his 16 passing attempts for 208-yards and a passing TD. Grigsby also rushed the football 13-times for 121-yards and 2-scores.

Caleb Bogonko (’22) rushed the football 16-times for 197-yards and 5-rushing TDs in a performance which has set the bar pretty high on the Jerky-worthy scale. Tyler Kelly (’22) had 13-tackles with 3-TFLs and Spencer Wheeler (’22) had 10-stops, two of which were behind the line. On the night, the Yellow Jackets gained 319-rushing yards on 30-carries scoring 7-rushing TDs. Middlesboro’s record is 6-0; Breathitt drops to 0-5.

Logan County’s Mattia Giubilato (’23) was 1-1 on his PAT attempts Friday night and some might want to say, “So what!” Well, ordinarily, converting a single PAT probably wouldn’t matter.

However, Giubilato is the place-kicker for the Logan County Cougars. The Cougars beat the Hoptown Tigers Friday night 13-12.

In a game of inches, Giubilato covered his inch and that inch was the difference between overtime and potentially coming up short and winning a game with serious playoff seeding implications down the road.

Elijah Hawkins (’24) had a big night defensively for the Cougars. Hawkins led the team with 9-tackles, 4 of which were TFLs, and 2 of which were QB-sacks. On this night, every single contribution counted. Logan County is 4-2 and Hopkinsville High School is 2-4.

The Raceland Rams took on Greenup County this past Friday. Logan Lundy had an efficient outing under center. Lundy completed 17 of his 24-passing attempts for 206-yards passing with 3-TDs.

Noah Wallace eclipsed the century mark with 102-yards on 15-carries with a TD. Raceland moves to 4-1 while Greenup slipped to 1-4.

Many wondered how Owensboro Senior would play after their star QB reclassified and bolted for Rutgers University. Well, the Red Devils are 5-1 and the one loss occurred with Wimsatt at QB.

Since his defection, the Red Devils are undefeated. Sahvon Hines (’23) had 3-TFLs the other night against Ohio County and Zachary Clark (’23) picked one and took it to the house.

Russellville (Class 1A, District 1) is 5-1. This should be no surprise for anyone who follows this magazine online.

We predicted the Panthers were “back” preseason. We were right.

Justin Walsh (’22) carried it 16-times for 117-yards and a score on his own. On the night, Coach Kevin Wallace’s guys gained 303 yards over the ground with 5-rushing TDs.

Eric Perez (’22) had 10-total tackles with 4 of his coming behind the line of scrimmage. Pike County Central beat Floyd Central 54-28. The Hawks are 2-4 and the Jaguars from Floyd Central dropped to 0-6.

Jack Sivori (’22) had a huge night the best time for any player from St. Xavier in Louisville to shine. Sivori rushed it 27-times, gaining 153-yards with 3-rushing TDs.

Justin Walsh (’22) carried it 16-times for 117-yards and a score on his own. On the night, Coach Kevin Wallace’s guys gained 303 yards over the ground with 5-rushing TDs.

Looks like it pays to have Kentucky’s best offensive center in Carter Guillaume (’24) anchoring its offensive front. Word is he wrestles pretty darn well too.