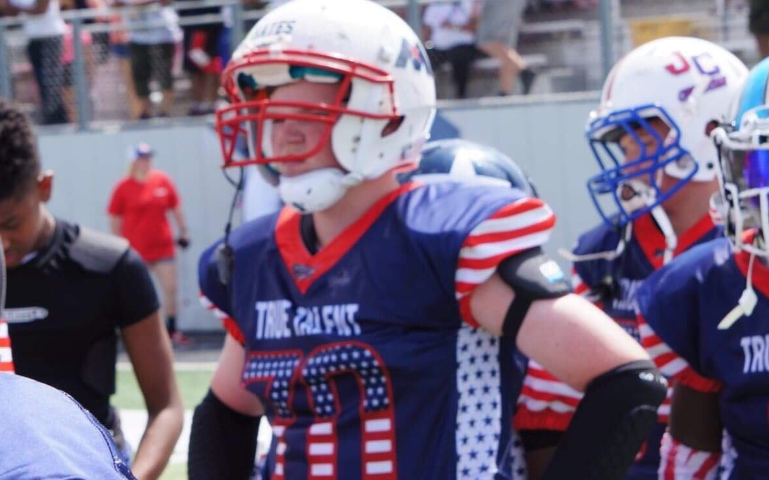 We are on the cusp of beginning a new high school football season. We have learned, if nothing else, that there will be some outstanding freshmen across Kentucky who will hit the field for the HS team, night one, snap one for some.

This has been a growing trend over the last 10 or so years. More and more middle school players train and work, off season, to morph themselves into physically older and more mature players.

Seasoning not required. There are freshmen who may have played as 8th-graders were such a thing permitted by the KHSAA. This would apply to these five guys.

For the next five freshmen, KPGFootball is confident they will see action opening night for their respective programs. Some of these programs are right sizable and not accustomed to playing frosh.

These guys will play. They would play, night-one/snap-one, for more than 90-percent of the high school programs across Kentucky. They are that good!

Breathitt County has a LBer on the way which hearkens Bobcat memories to second level defenders the likes of Will Thomas (Will Tom) Collins and Kenneth “Shorty” Combs (Kory’s dad). For us at KPGFootball, Kory reminds us of Austin Gough.

His highlights are sick. He will start next year on The Riverbank for Breathitt County.

This guy is 6-0 and weighs close to 205-pounds. He can rep, on the bench press, multiple times at or over his own body-weight and is already power-cleaning 2 or more plates (225+).

Incidentally, if we have to tell you what a plate is, this might not be the site for you. The kid hit Kalen “Jaws” Washington, another “No-doubter,” so hard in practice leading up to the Team Kentucky FBU run to the National Title Game in this year’s FBU National Championships that it was literally talked about all over the commonwealth of Kentucky. It was the “shot heard around the Commonwealth.”

If memory serves, it broke some of Washington’s equipment. Kory headlined his region in the “Battle of the Regions (Region 4)” and was starting at ILB for Team Kentucky Future Stars prior to straining his MCL at practice. He’s back at full speed now ready for the season to start.

We have no idea what you will notice when you watch his highlights. We are well experienced watching prospect highlights and are happy to share with you our impressions.

If you watch the film, we think you will see a kid who looks (physically) like a junior in high school playing against competition stuck in a lower gear than he. We saw a linebacker with upper-level closing speed, a guy who got “down-hill” defending the run in a synapse, a guy who rolled his hips through the ball carrier and drove him through the ground like an All-American at his position.

We want to be very clear. This kid is very likely to see time running the football for Breathitt County night one. That being said we don’t see him attracting the attention as a RB we believe he will defensively at his natural LB slot.

We believe Kory Combs to be a real prospect at linebacker. He just has “it.”

If you have ever evaluated linebackers, we don’t need to provide anymore explanation than that. He’s on the field for the first snap for the Bobcats at ILB. Write it down!

We asked our own Fletcher Long about this kid for an earlier article. What he had to say still rings true today and is worthy of reiteration.

Long told KPGFootball, “Austin’s a ‘can’t miss’ prospect. He starts for 95% of the high-school programs, night-one/snap-one, across the commonwealth of Kentucky, regardless of classification. I don’t care what these programs claim to be or what their “official” position on playing freshman at the varsity level is, you don’t have guys who look like Austin, have his skills, his speed, his quicks, his strength, his power, and his explosion playing junior varsity football in Kentucky. Period!”

Alexander is an imposing physical specimen who has the pedigree to dominate the high school level even as soon as this coming year. He has made every premium team an athlete from his level can make, from both Future Stars and FBU Elite to the Under Armour All-American team and FBU’s All-American team and Top Gun showcase.

He may well be the top-rated freshman player in Kentucky’s ’25 class. He will start fielding college offers very soon. He will be in the Friday night lineup when Cooper travels to Winchester, Kentucky to play Kalen “Jaws” Washington’s GRC ball club for the opener.

Defensively he had 112-tackles, 16-TFLs, and a forced fumble. We think he could start out on offense though we wouldn’t rule out defense. Belfry suffered heavy graduation across the defensive second level, where Stanley would figure to fit.

Yeah, we don’t see this guy sitting for long, if he sits at all; do you? Stanley was the KYMSFA, Division 3 Kentucky Player of the Year.

Predicting Stanley will challenge for playing time as soon as he gets assigned a locker isn’t too much of a stretch and doesn’t make KPGFootball the Edgar Cayce of high school pundits. Our job is easier than many people think.

LCA plays in the toughest district in the 2A classification with the number one overall RPI likely again this year provided they beat the bevy of “heavyweights” they have again scheduled. They yearly have to contend with other 2A powers like Danville and Somerset just to see round three.

The Eagles are the class of 2A this coming year. They have the deepest and most talented roster in the classification.

Doesn’t matter, Preston will see the field as a freshman anyway. Yeah, he’s just that good.

Preston may matriculate to the defensive line before his high school career is finished. However, he figures to plug-in faster across the Eagle offensive front-five.

Preston averaged 5-solo tackles a game in MS, 4 of which were TFL’s (tackles for loss). He also rung up a safety defensively a year ago.

His performance at right guard was equally impressive. He and his line cohorts didn’t allow a single sack over the season they were permitted to play, which is impressive as LCA tends to throw the football all over the ball-park, if you catch my drift.

Preston has played a ton of all-star football. He was on Kentucky’s Elite team for both 13U and 14U where he was a Defensive Team Captain. He has played in Battle on Rocky Top, D1 Nation’s Best of the Best, and D-1 National Youth Football Championships, the latter two being played in Atlanta, GA.

Preston played in the 2021 True Talent All-American Bowl as an OT and LB after that game’s getting cancelled in ’20. Hayes was selected to the ’20 squad too. The game is annually played in Lafayette, LA.

Hayes is an All-In kind of kid, giving 100% in the classroom and on the field or court as a three-sport athlete. He’s also among KY’s “more decorated players.”

In the classroom, Hayes has maintained a 4.0 GPA at LCA in advanced classes. On the field Hayes shows a high level of physicality, aggression, and quick feet for his build and size.

An LCA coach told KPGFootball  for an earlier piece we published about Hayes, that Hayes is likely to play Friday night for them sometime over the course of his freshman season as a 5-technique (DT). Here closer to the season, we see the time table for playing him has moved up some and it appears OL is where he may first crack the lineup.

He is in the two-deep on both sides of the football (we are told) and really pushing. He is candidate to start along the front for LCA in its opener on offense according to what a coach on the staff told us just a few days ago.

LCA is not an easy program to crack the starting lineup as a freshman. Former Atlanta Falcons linebacker, Buddy Curry, after coaching Hayes in an All-American game, had this to say about him, “Hayes is a unique young man-excelling as a high achiever on and off the field. I’ve watched him knock opponents down with ferocity and extend a humble/helpful hand after the play. He possesses a unique maturity to compete, dominate, and lead with a smile.”

Yep, this guy plays early. Seems pretty clear to us!

Yessir, you read that correctly. We believe Washington will be the primary ball carrier for a Class 6A team on its opening night, when Cooper comes to town looking to “mix it up.” Why do we feel that way? Have you any idea the type of numbers this kid posted in Middle School just in the playoffs?

What a day Kalen “Jaws” Washington had for Elkhorn against Union in the Division I, semi-final. Elkhorn advanced to the State Championship game where they ended up winning the Division I championship a year ago, largely on his efforts.

In the semis, Washington carried the football 17-times for 457-yards with 7 TDs and 3 PATs on the day. That is 26.8-yards per carry and hitting pay-dirt over 41% of the time you are handed the football.

Get this, the 5’9″ 188-pounder was also a standout at inside linebacker for the defense and was second on the Elks’ squad in tackles. We talked to a rival high school football coach about this particular prospect. This guy told KPGFootball, “Kalen is humble and encouraging to his teammates. He leads by example and out-works everyone on the team.”

Sounds like a star so far. He continued to tell us, “Washington’s skill set as a runner is balanced with power with the violence to finish tough runs. Washington has excellent vision and cuts well with the speed to separate once he gets to the back-end of the defensive secondary.”

Washington, like so many on this list, made numerous post season, All-star, All-State, and All-American type teams this offseason. Quite frankly, he is considered by many to be Kentucky’s premier RB at his particular grade level.

We believe his frame lends itself to playing RB for the most part over his HS career. He will get some burn on defense too, before his career has sung its swan-song.