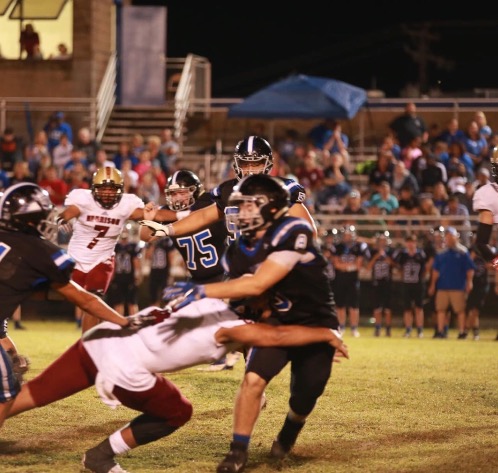 There aren’t a ton of tough guys around like there used to be. Remember the old-style FBs who just threw caution to the wind and (Dodge) Ram-butted linebackers at the second level just to get their tailback an extra few yards?

There will always be a place on a football team for that guy. Breathitt County had one last year named Dalton Manns. Somerset had its Jase Bruner. Mason County has one every bit as tough in Brandon Dearing.

He’s really smart too. Dearing, a rising junior at Mason County High School, sports a 4.22 GPA. He also back-squats 415-pounds and power cleans a “cool-215.” Not bad for an “A” student, huh?

Brandon started at RB and MLB on the JV-team and was a key backup at RB for the varsity his freshman year. This past season he took over the bulk of the work at RB, though he was deemed “too valuable” to pull the double duty at the “Mike.”

Brandon did get one game’s run on defense his sophomore year. He got into the game and caused a fumble. Yeah, that’s our Brandon Dearing, always making something good happen on a football field.

Dearing is described by Royals fans as a “powerhouse.” He breaks tackles and shows really good speed once he gains the 2nd or 3rd level of the defense.

In 2020, the blocking in front of him promises to be much improved. We believe he will rush for better than 1,000 yards and score a dozen or so rushing TDs in the coming Fall.

The most important thing about Dearing is he has an excellent work ethic. We hear from teammates, like Dravin Routt, that Dearing motivates the whole team and has exhibited excellent leadership qualities, especially for a player who is just now becoming an upperclassman.

Brandon Dearing is an excellent blocker. His favorite player is Christian McCaffrey. The comparisons are obvious; the similarities, glaring.