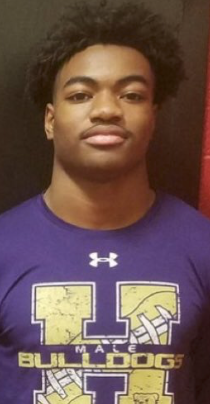 He’s been a star the first two years, no reason for him not to finish out the same way!

We have dubbed him “Vinny the Jet.” He has consistently lived up to that description.

Whether it was his freshman year where he (incredibly) clocked a fully automated 4.7-second 40-yard dash or his sophomore year where he consistently garnered Track championships as a sprinter. He’s a “Jet” period; just really nothing else to say.

Anthony played as a true freshman at Male on the varsity, something Male swore couldn’t possibly happen there. He gained close to 100-yards and scored 2-TDs in the 6A State Championship game and was very nearly selected the offensive MVP of that game. We selected him to our freshman All-State football team for his efforts.

He exploded further over his sophomore season. “The Jet” caught 34-passes in 2019 for 573-yards receiving and 10 TDs receiving. He was second on the team behind only Izayah Cummings. Male was 14-1 in 2019 and Vinny, again, was selected to the KPGFootball All-State football team, this time the sophomore version.

It’s almost a matter of “what’s really next for him to do?” Well, quite a bit if you ask either his father or him. I suppose now he needs to be ranked at the top-3 or so of his class’s prospects. That’s a matter for Rivals or 247Sports.com. We have had him in the top-3 of our 2022’s since he was an eighth grader.

Vinny “The Jet” has been invited to the National Combine and All-American game hosted by 247Sports.com. That would appear to be an indication of just where that particular service sees him among his Kentucky brethren in his graduating class, positionally or otherwise.

We aren’t in the custom of complimenting competitors or even giving them free publicity on our site. However, 247Sports.com looks to be on the money with this particular All-American selection.

We can’t wait to see what Anthony does this coming Fall. We bet many of you can’t either.