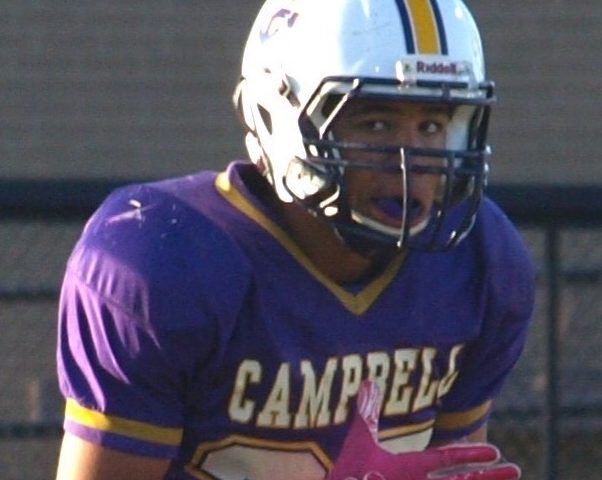 His scores in the classroom are head turners too. He’s a 3.86 GPA guy who is able to do this while balancing playing basketball, football, and working at McDonald’s.

He did get some freshman run last season and was dominant as one might expect. Davie played both ways, at WR and DE, and was the defensive MVP of the freshman squad.

He did right well in basketball too (his dad is an assistant basketball coach at Louisville Doss). Davie was the MVP of the freshman team in basketball and tournament MVP.

One of the coaches at Campbell County High School sent us a statement about Desmond. He told KPGFootball that Desmond has played WR/TE and DE a year ago.

He called Desmond, “A special player who dominated games. All he has done since last season is get bigger, faster, and stronger. He is projected to play WR for us this season.”

Many of you know we relish opportunities to bring stories to you about superstars BEFORE ANYONE ELSE. Desmond Davie presented for us such an opportunity.

He’s a guy about whom opponents are not yet talking. He’s not in the opponent’s game plan scouting report to start off the year.

Right now, Campbell County is a team in 6A a lot of opponents will tend to take lightly. While the 6th-District team does play at Kentucky’s highest classification, they did open 2019 with a two-touchdown loss to Class 1A, District 4 Newport Central Classic.

This presents a real opportunity for a young WR with Desmond Davie’s frame to align on the other side of Preston Agee, another young stud playing at Campbell County. It is time for Agee and Davie to take that “next step” so Campbell County can take the next step too.

Mike Woolf’s Campbell County High School team was 6-5 in 2018 but had graduation deplete the talent needed to compete with the Simon Kenton’s of the world. They were a first round exits last season who endured a 1-10 season. There are plenty of returners unhappy about that and anxious to show that was an exception and not the rule around the Camel program.

We feel comfortable predicting Desmond Davie will have a steady and significant hand in the Camels’ fortunes in 2020. He is a break-out guy who is going to make the most of the opportunity 2020 brings him. Remember the name!