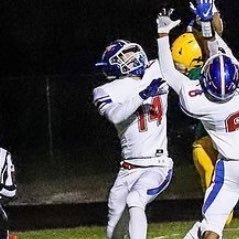 We have one for you today. Cooper Mullins, class of ’22, from Madison Central High School intrigues us.

First of all, the Tribe has been a bit thin of warriors on the plains of late. That is why they have brought in the legend, Mike Holcomb, to take the reins.

Holcomb loves Richmond, Kentucky. He attended EKU. He’s a big supporter of the Colonels and feels right at home in his new digs.

So, let’s just take ’20’s 1-8 mark and wipe that board completely clean. None of that matters now; there’s a new sheriff in town.

Among the players who is looking forward to the pristine new drawing board is Mullins. Mullins is a well put together 6-footer who weighs in at 170-pounds.

We have watched quite a few of his single-game highlights and he has a steady back peddle and flips his hips and gets on top of the deep stuff well. We like how he transitions. He transitions like an athlete.

Mullins only made 10-tackles in his 9-games of action. Okay, that doesn’t sound like a lot and it isn’t. However, he led the team with 2-FFs so when he showed up; he showed up angry. There is that.

If you really think about it, his number of tackles is somewhat deceptive. He’s listed as a WR/CB on the MaxPreps website. We couldn’t find any film of him working on offense. On defense, the film we saw had him at safety.

Now, we liked what we saw of his safety play. He found the ball well. He was able to get to the football while it was in flight and “climb the ladder” to knock the aerial away from its target.

We have a funny feeling this is a player who will greatly benefit from the new regime. We just have a feeling about this guy. We believe he will have a big-time senior season.