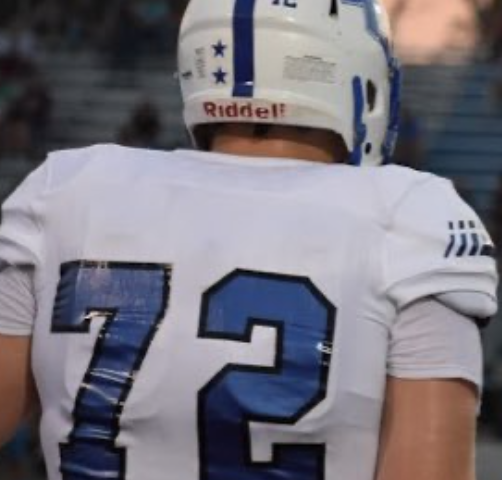 There are some bets safer than others. In the sporting world, there are darn few “sure things.”

We know, for instance, Belfry and Johnson Central are going to “pound the ground,” each and every Friday night. We know Owensboro Catholic and Hopkinsville High School are just as likely to fill the Friday night air with footballs as run with it.

Well, if you are a RB at Spencer County, playing for Mike Marksbury, we have given you a good picture of what you need to be finding once the ball is “seated” into your gut. Find the vast expanse of manhood, Gavin Phillips calls a back, it will be the jersey with “72” on it. Follow him!

Just in case you couldn’t figure it out from the featured photograph which one is your target for escaping the first-level of defenders, we have provided a second picture to the immediate right of this paragraph. The blue lettering below the picture are his highlights. Watching them might give you a good idea why we are making this recommendation.

Gavin is a guy who has plus frame for where he is deployed, OT. Phillips is listed at 6-6 and tips the scales at 330-pounds.

Watching his highlights, we thought he shot his hands very well. He has a devastating “punch” and few linemen, across from him, with whom he connected, were able to withstand it. It generally sent defenders sprawling.

Being honest, we thought his first two steps needed some work. If Gavin has a part of his game on which to work it would be strengthen his core where he can “fire-out” instead of “firing-up.” Often times, by the time he gets to the defender, who isn’t thrilled with the encounter and rarely raring to get to him, Phillips is completely vertical, like some sort of super-meaty straight-line.

This isn’t an uncommon problem with high school “bigs” who are as tall, long, and heavy as Phillips. Lots of guys who are 6-6, 330-pound youngsters are late-developing the kind of core-strength needed to play at the “5-8, 5-9 level” college coaches want to see. That is why HS bigs struggle with any defender who consistently plays “under the O-Lineman’s hands.”

Being able to gain 272.1 yards a game, while scoring just over 3-rushing TDs a game, with everyone in the stadium knowing what is coming and likely behind whom is a testament to Phillips’ effectiveness in the run-game. The run:pass ratio in 2019 was 446:116.

That works out to running the football 8 out of every 10-plays. Spencer County is not exactly Belfry or Johnson Central on run-weightiness, but certainly no Mayfield either.

With Phillips the whole picture for him as a next-level player centers on how well he becomes able to move his feet, how well he can “kick and drag” in pass-protection at the next level, and at what pad-level he is able to play, going forward. We believe once he demonstrates an ability to move his feet equal to how well he shoots his hands, and plays at a consistently lower-level than where he presently plays, you are looking at a guy who may end up at a smaller school in college and then make the league as his late-bloom comes into its full physical-flower.

This guy has loads of potential. Mobility, balance, and pad-level are really his only concerns presently.