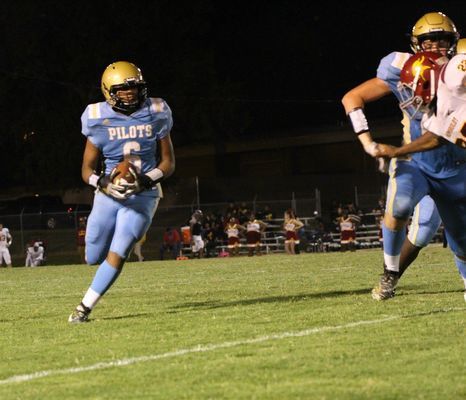 Not all things should necessarily be taken literally. Like three or so years ago, when Coach Craig Clayton, at Hopkinsville, was breaking in a new, sophomore QB who missed his entire freshman season to injury. Coach Clayton hailed his unproven (but physically-gifted) signal-caller as being “better than Deontey Kenner, at this point in Kenner’s career.”

The QB Clayton was referencing had missed his freshman season to injury. When Kenner was a freshman, he came of the bench in the second half of a game with Christian County Hoptown was trailing 21-0 and led the Tiger’s back to a 22-21 victory in the second half.

I was at the game. It was possibly the gutsy thing I ever witnessed from a 14-year old kid, in front of thousands of fans, against one of the largest classification’s most talented rosters, and his team’s “cross-town” rival. Biggest game of the year, three TDs behind, freshman comes off the bench cold and leads his team to victory in the second half. Kenner started the rest of the year.

So, in no way, could it be said the sophomore coming off injury was “better than Kenner” at the same stage of development. It was a ridiculous comparison.

How does the coach who coached both QBs possibly compare one of his team’s all-time QBs with an untested QB at the start of his sophomore year? How can the unproven QB possibly be “better than” a QB who went on to CUSA’s University of Cincinnati and completed 517 of his 961-passing attempts for 6,467-career yards, and 31-passing TDs; all while playing at college football’s highest level, FBS?

This is a comparison often called a “false equivalency.” Clayton didn’t mean it literally. He was saying his sophomore was maybe as physically gifted, had some of the same intangibles, and could round into being better, one day, should he develop as Coach was forecasting. As it turned out, the QB he referenced didn’t have close to the same career as Kenner and is going to college to play football as a WR/DB and not a QB anyway.

So, when our friend, James Bridges, the HFC at Fulton County High School says his back-up, DiAvian Bradley, is “just as good” as western-Kentucky’s preeminent player at the RB position in 2019, Caleb Kimble, he probably doesn’t intend for us to take that literally. For instance, Caleb Kimble carried the football 207-times, in 2019, for 1,770-yards and scored 24-rushing TDs. The young sophomore, Bradley, who is 6-0, 210-pounds (by the way) carried it 56-times for 371-yards and 5-rushing TDs.

Now something with which we wouldn’t quibble is the fact Bradley has the POTENTIAL to be every bit as good as Kimble SHOULD HE KEEP WORKING AND KEEP DEVELOPING. That is what our friend meant anyway. In that regard we would agree with him.

If you will look below the picture of Bradley in his basketball uniform, you will see a link to his impressive, football highlights. He is a physical specimen who hits the line hard, gets down-hill fast, and has the speed to run-away from back-level defenders once gaining even with them.

As you can see from his frame, he has plenty of length and his topping out at 6-0 and stopping at 210-pounds…probably not likely to happen. He will thicken, quicken, and gain speed as he physically matures. Before he is done at Fulton County High School, he may end up really being better than Caleb Kimble, though HS backs like that don’t grow on trees or come around often.

He will get excellent coaching under James Bridges’ tutelage. Bridges is one of the best around at developing kids and promoting them to the next level of competition.

Fulton County is one of those areas underrated for the amount of next-level talent it produces. It always seems like some Broc Bridges/Caleb Kimble/DiAvian Bradley type stud is lurking around that county for some reason ready to come out for the football team.

Bradley will be getting the 200-plus carries for the Pilots in 2020. There is no reason to expect the Junior-to-be will be anything other than sensational picking up the slack from where Kimble left-off in the run-game.

Was Bradley “just as good” as Kimble in 2019? No, and James Bridges knows that as well as we.

Can he be? Yes, if he works as hard as Kimble did at developing his physique and skill-set, he certainly can be.

KPGFootball suspects we will look back at the end of this coming season and say, “you know what, that old James Bridges was right on the money!” The information he has given us in the past has certainly turned out to be money!