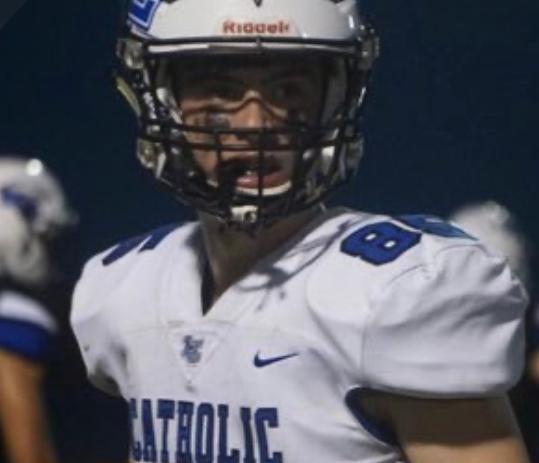 You would have a hard time telling me anyone meant more to their team’s fortunes in 2019 than Beau Allen did for the Knights of Lexington Catholic. He completed 248 passes of the 366 he attempted, threw for 3,682-yards, and 38 passing TDs against only 8-picks. On top of that he was the team’s leading ground gainer (478-yards) and scored 12 of the team’s 18-rushing TDs.

How in the world does one replace that? Well, you really don’t. That’s bad news.

Beau Allen was the type of high school quarterback which comes around once in a coach’s career if that coach is very fortunate. That is how you go from the HS ranks to the FBS, Power-5. They aren’t recruiting a bunch of “ordinary” in the SEC, which joins the AFC and the NFC as the three best conferences in the game of football.

Still the cupboard isn’t completely barren. Provided, of course, the Knights can find someone to chuck it down the field.

Blake Busson had one whale of a season, especially for someone who was only a sophomore in 2019. Busson caught 56-passes for 1,098-yards and 12-TDs.

Jackson Corbett, Class of 2021, didn’t have a bad “country” season either, as the saying goes. Corbett caught 72-passes for 1,139-yards receiving and 11 TDs. That’s good news.

Here’s the thing about both Busson’s and Corbett’s numbers, Lexington Catholic didn’t get out of the second round. Those are huge numbers for 12-games of action.

Busson has good size, 6-0 and 170-pounds, and runs precise, disciplined routes with deceptive speed. He gains easy separation from the 2nd and even 3rd levels. Check it out as his highlights are under his picture.

If we are being perfectly candid, Lexington Catholic was too dependent on the forward pass in 2019. Old Coach Lyon has said this until he is practically blue in the face; but teams have to run the football to win football championships in Kentucky.

Lexington Catholic couldn’t really run the football in 2019 and won’t be particularly good at it in 2020 we don’t think. That is bad news.

Last year, the Knights were way too pass-happy, though we certainly understand why. Allen, Busson, and Corbett aside, teams have to run for more than a measly 1,039-yards in 12-games to carry off the appearance of a credible ground threat. The Knights rushing attack compiled under 87-yards a ball game while averaging a tad over 20-carries per.

Being offensively one-dimensional while playing non-discernible defense is the very recipe for going 7-5 with one of the best HS QBs to come through the KHSAA in quite some time. That is how a team scores 36 a night and still almost finishes .500 (.58333333 winning percentage in 2019), in case any of you were wondering. That is also bad news.

However, the good news is whomever the Knights get to take snaps, set up, and look downfield, that person is sure to see a couple of aces open. One of the guys who’ll be free is a guy we think is among the best in his graduating class at his position.

Busson’s coming back from the sophomore season he had is really good news. The most significant jump a player in high school makes is between the sophomore and junior seasons.

I suppose it will make for a predictable game-plan. Just chuck that thing up in the air somewhere and let Corbett and Busson go make a play for you. It kinda worked last year.