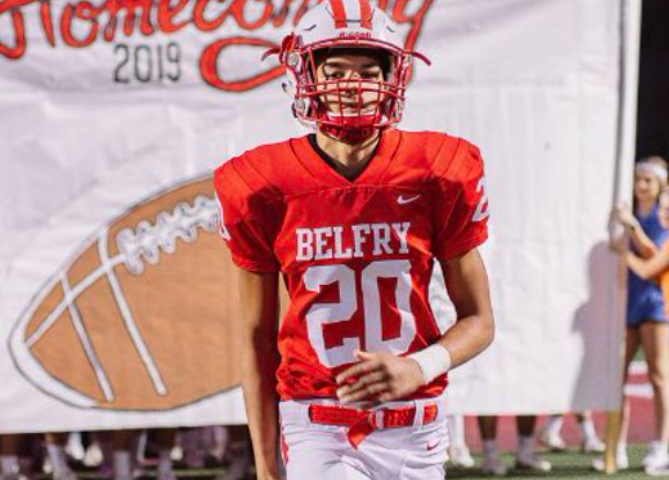 He’s the premier player in his classification and graduating class at his particular position. That’s how one makes the KPGFootball, Freshman All-State football team. We aren’t out there reporting on dogs, y’all.

His name is Rudy Blackwell, Jr. and his performance was superlative when pressed into significant action last year when superstar performer, Brad Lowe (2021), was lost to injury. Belfry, a powerhouse Kentucky football program which just so happens to compete at the Class 3A level, is not the place freshmen generally go to see the field on Friday nights.

The official statistics have him playing in 13 of Belfry’s 14-games. Though State Champions in 2019, Belfry only played 9-regular season contests. That is somewhat standard for the Kentucky school which has trouble finding teams which want to play them.

However, Belfry is one of the teams we have pretty well scouted. One of our KPGFootball “correspondents” lives in Pike County and has those teams well covered for us. He tells us Blackwell only saw “significant snaps” in 10-games as he was slated for “spot duty” until Lowe succumbed to injury.

When Blackwell “stepped-in,” boy did he ever take some steps. Blackwell, playing the DE/OLB hybrid-post in the scheme had 48-tackles and 2 QB-sacks.

Rudy, like Grayson Cook who is departing to play football in the FBS (Air Force), is a long, tall, rangy hybrid which Belfry seems to grow on trees for some reason. Rudy is 6-3 and rail thin, at 180-pounds, heading into his sophomore year. Man-o-man will it get interesting when he thickens and settles into his “grown-man” frame.

Blackwell runs very well (plays RB on offense though destined to be too tall to stay there) and has exception bend to go along with his length (also exceptional). This gives him the natural ability to get up-field and pressure the passer while still having the range and speed to set the edge defensively or chase the play into the boundary. Once he gets extended, it is difficult to avoid his getting his paws on you.

Blackwell is a guy with plus frame, plus athleticism, plus bend, who needs to add strength and power to the “plus”column. Some of this happens naturally with age. He’s a “baby-faced” 6-3 now. The rest needs to come in strength training.

Belfry figures to be right back in the driver’s seat for the 3A State Football Championship in 2020. Players like what is in its 2021-class, (Ben Bentley, Isaac Dixon, Brad Lowe, Seth Mounts, etc.) together with sophomore like Blackwell will insure the Pirates aren’t going anywhere for a while.