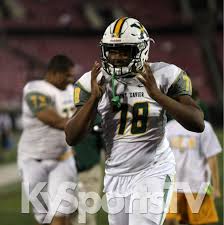 Not too long ago I got a call from a subscriber whose son wasn’t getting the traction in the recruiting process he would have hoped. His son, a 2021 RB-prospect, played football at a prestigious program in a large Kentucky classification and he didn’t have an offer.

This subscriber is probably resting easier now. His son is doing quite well on the recruiting front currently; but he was really re-thinking quite a few things when we were before talking. His son, had a tremendous junior season, but he didn’t see the field his first two years.

The debate was whether his taking his son to play at this prestigious, large classification program was or wasn’t a mistake. Sure, he was seeing better competition regularly than a lot of the in-commonwealth college programs regularly see; but, in the end…if a tree falls in the forrest and no-one is around to hear it; it really DOESN’T make a sound.

That is the decision many parents face. We can’t answer that for you.

We have an opinion on it but it wouldn’t be right to impose our beliefs on you or on our readership. In the end, you have to be comfortable with the decisions you make, especially concerning your child and his athletic future.

Le’Andre Maxwell was hailed by us as the top DE-prospect in his class when we selected him to one of our All-State teams after the 2018 season. We are still high on him as a top-rated DE/DT prospect in his class. He hasn’t had much varsity “shine” in his first two years.

What was “good enough” to make the freshman team in 2018, basically a handful of tackles in spot duty at a 6A-power like St. Xavier, wasn’t, in the minds of our selection committee, sufficient production to warrant inclusion on the sophomore team. That is too bad for Dre, because he is still an elite player who would have had a huge, “Friday-night” season playing virtually anywhere but where he played.

We are including his highlights. These are JV highlights. St. Xavier’s JV team would beat a ton of teams in Kentucky’s 6A, believe me.

Dre still possesses many of the attributes which made him stand-out to us when he was a member of the prestigious Team Kentucky. He has a relentless motor, scrapes down the line of scrimmage well either direction, has a devastating “stab” through offensive linemen to gain entry into an opponent’s offensive backfield.

Maxwell still has the quick feet, burst off the ball, fluid hips, and close-out speed all making him rank highly at his positions, at least in our minds. He has the bend to play outside, and the bulk to slide inside.

Maxwell is 6-1 and weighs 260-pounds now. He’s added quite a bit of weight since we last featured him.

Maxwell is a guy who is going to start fielding offers; but, it may not be until after his Junior film makes the rounds. He will never come off the field this coming season. His production will sky-rocket over the 4-varsity-stops he was credited in 2019.

If we were stock-brokers, this is an example of a certain “buy.” This guy’s stock is about to take off.