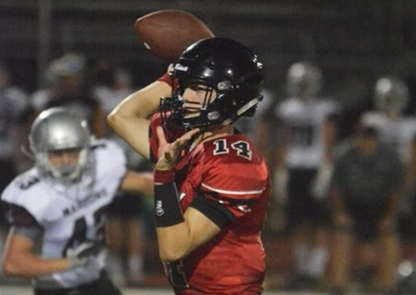 The Bourbon County Colonels have just hired one of THE up and coming young head coaches in Kentucky’s high school game in David Jones, formerly the head coach for three years for Phelps High School. Jones will be taking the reigns of a program which, since 2011 (8 seasons), has won 64 football games (8 wins per), including back to back 13 win seasons and Semi-state births in both 2012 and 2013. Still, the program struggled through a 3-8 year in 2018, hence the decision to change head coaches.

One of the first positions at which any program desires stability, especially with a new regime hitting town, is the QB position. Luckily for Coach Jones he has an exciting and dynamic young signal caller around whom to build the foundation for his offense going forward. He has former UK quarterback’s son, Jake Broughton.

Jake Broughton is the son of former Kentucky Wildcat Chuck Broughton, above depicted (No. 14). Unlike Chuck, who was locked in a controversy, while at UK, surrounding whether it should be Glenn Fohr or he under center for the Cats, there appears to be no question “little Broughton” should be taking snaps for the Colonel football team for the next couple of years.

We at KPGFootball are familiar with Jake as he played for the Team Kentucky FBU Elite team back in the winter following the Fall of 2015. At the time, Jake was a seventh grader and had an extremely elongated throwing motion with an abnormally low release point. In watching Jake’s highlights he has tightened up his delivery to where the ball is coming out quickly. Jake has also considerably raised his release point which, coupled with his being much taller, has resulted in fewer of his passing attempts being deflected at the line of scrimmage.

Jake is a player who will thrive and flourish under Jones’ system as Coach develops players to play with Jake, both along the line of scrimmage and as backfield mates and down-field targets for his throw game. Jake is a true dual threat guy who presents problems both when he drops back to set up and deliver the ball and when using his feet to break down a defense. Whether a designed run or exercising his ingenuity upon the protection crumbling, Broughton is a difference maker exploding through the middle of the defense or outside the tackle box where he has to be contained.

KPGFootball will be thrilled to monitor both this player and the Colonels, going forward, under the tutelage of Coach Jones and whatever staff he ends up assembling. We are certain QB Jake Broughton will figure prominently, both in the Colonel’s game plan and the opponent’s scouting report, until Broughton ultimately graduates.