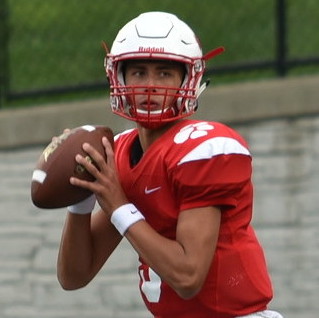 A group of Lions is called a Pride. Well, what is the name for a group of Tigers? Interestingly, Tigers don’t live in groups in the wild. However, in captivity, a Tiger and her cubs living together is referred to as either a streak or an ambush.

When found living and working together in Fort Mitchell, Kentucky, a group of Tigers is called Beechwood High School. For much of the football team’s wonderful history and tradition, its opponents, even opponents playing in much larger classifications, have felt ambushed by this particular streak of Tigers many, many times.

The Tigers found the sledding up in the 2A classification pretty rough in the first year of the program’s realignment. After coming off three straight Class A Kentucky Football Championships (2016, 17, & 18), the 2019 edition got ambushed by some Cardinals in Mayfield, Kentucky in the state semis.

Still, with 2020 upcoming, there won’t be any legitimate publications which not predicting the Tigers of Beechwood to be firmly in the Class 2A, Kentucky High School Title hunt. Players like QB Cameron Hergott is just one reason why.

Hergott, whose picture is to the right of this paragraph and whose NCSA profile is linked thereunder, is easily one of the top-3-5 QBs in Kentucky’s 2021-class. He is its very best, dual-threat guy, in our humble estimation.

Last season, playing easily the hardest schedule in the 2A classification (Paintsville, 1A State finalist; Somerset, 2A State Champion; Corbin, 4A perennial power; Covington Catholic, 5A State Champion; Holy Cross, 1A State semi-finalist; and Mayfield, 2A State finalist), Beechwood, after losing its 4 of its first 5, won 7 of its last 9 coming home. They actually were able to beat Corbin, 26-10, in Fort Mitchell on September 13, 2019.

The Tigers did this by excelling on defense and putting the football in the hands of its most dynamic offensive threat every play. Hergott was 177 for 286 through the air in 2019 for 2,076-yards. He had 15-TD passes and threw 7-intereceptions.

Standing alone, those numbers are impressive but not the numbers from the level of star this kid really is. Along with his nearly 62% completion percentage and over 2:1 TD/Int. ratio with his over 2,000 yards passing, Hergott also gained 751-yards rushing to lead the team, on 134-rushing attempts, with 12-rushing-TDs. He was the offense’s leading scorer and QBs get zero credit for the TDs they throw in tabulating that statistic.

He accounted, either throwing or running, for 27-TDs. The offense accounted for 47-TDs on the entire year in its 14 games. So Hergott had a hand in roughly 57% (.57446809, to be exact) of the team’s entire offensive point production for the year. Don’t know how one player can be any more instrumental to his team’s fortunes. Do you?

Hergott’s recruitment is picking up as colleges are noticing how his skill set will translate well at the college level. Outside of the height thing, Hergott’s game-play is reminiscent of former Pikeville QB, Connor Roberts (5-10), who he happened to out-duel in the 2018 State-Title game 21-20. On that day, Hergott threw for two TDs and rushed for a third; giving him a hand in every single TD scored that day for Beechwood.

Roberts is on the present roster at Centre College and has just completed his freshman season. Centre College is hot on the trail of Cameron Hergott too, which makes sense. The Colonels prefer having a QB run its spread attack who can break down defenses multiple ways.

With the losses Mayfield has experienced and Somerset’s having to get through LCA, a team in its district it split with a year ago and which has most all its weapons returning, it would appear Beechwood has to be among the early favorites to get to the semis again at the very least. If the Tigers can use its tough schedule to improve its RPI by winning a few of the games it dropped a year ago, Hergott and company could get the semi-state game at home, which would make a huge difference.

There will be lots of potential quarry coming into Fort Mitchell this coming season. There will be lots of opportunity on the road for the Tigers to ambush them some unsuspecting hosts. Teams may be fooled by the 2019, 8-6 mark as being reflective of the claws and jaws of these Tigers not being as sharp and lethal as they once were. That lack of respect would be foolish.

We would strongly suggest teams littering the Beechwood schedule fight that temptation. These Tigers believe they should win any game. They know they can hunt. They expect to win.

It looks to the old ball coach that these Tigers are on the cusp of starting a new streak. It also appears the star at QB, Cameron Hergott, will (once again) be at the fore of the ambush.