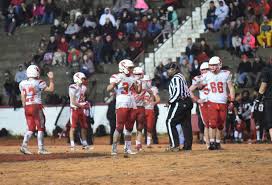 If you are looking for guys getting upfield, snap after snap, and wreaking havoc in a backfield, then we may have just found your guy. His name is Xavier Campbell and he is listed online everywhere from 6-1, 240-pounds to 6-2, 225-pounds depending on whether you access his baseball or football profiles on Maxpreps.

This brings up a good point. Campbell is a two-sport prospect who also plays baseball, though the present national pandemic took his freshman season on the diamond away from him. We are told and have confirm college recruiters prefer athletes who compete in more than just the one, primary sport. This should put Campbell in good stead going forward.

While robbed of knowing what Campbell would have done on the diamond, we did get to see what this freshman could do on the gridiron. We were right impressed. It isn’t easy to get in the rotation, as a freshman, playing for one of Kentucky’s premier programs at any classification.

Campbell is listed as a fullback offensively. He got a handful of carries as a freshman.

Where Campbell made his most conspicuous contributions to the Tigers in 2019 was on defense. We have linked his highlights from Hudl for you under his picture to the above right.

Now Beechwood is one of those programs which just publishes its offensive statistics on the KHSAA website. This is pretty interesting because it is on defense where the Tigers generally win their championships. They have won 12 overall, winning 3-straight in 2016, 17, & 18.

Though the defensive statistics are not fully logged online, we can tell you Campbell led the team, though only a Class of 2023 prospect, in two key statistical categories. He led the Tigers in both fumble recoveries and QB-sacks.

What this tells us is he engages in tireless pursuit of the football. He has a non-stop motor and is able to work both upfield and into the boundary. His highlights are supportive of this scout on his abilities.

After watching his highlights, we noticed Campbell uses his athleticism, burst, leg-kick, and limberness to bend by tackles. He appears to gain easy entry into the backfield. He harasses the football and its carrier at its most vulnerable point. He’s a disrupter.

We also saw a prospect who “scraped” both up and down the line making plays into both boundaries. This told us quite a bit about his ability to escape being reached and his range as a football defender.

This is a kid for whom the sky is literally the limit. One would have to figure he isn’t done growing an he is in the range of prototypical, FBS-level, frame for where he is likely to be deployed now.

As he matures, grows to his full stature, and makes gains in the strength and conditioning program at Beechwood, we predict this will be a DE you will see listed among Kentucky’s very finest prospects in his graduating class. By the end of his sophomore campaign, “Xavier Campbell” will be one of those names football junkies across the commonwealth will just “know.”

KPGFootball predicts 2020 will be a break-out year for Xavier Campbell. You will look back at this moment and marvel at the ability of our scouts in finding players like him BEFORE ANYONE ELSE IN THE BUSINESS.