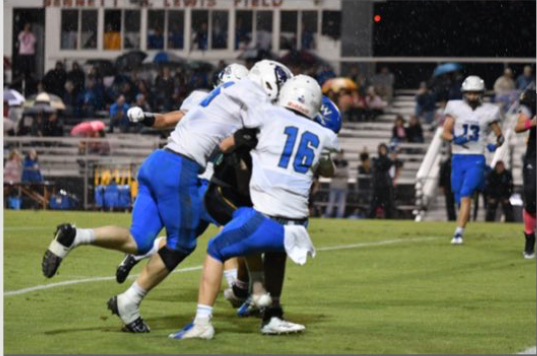 Mason Moore, who wears number 16 in case you were looking at the featured photograph and wondered which one of the players was being featured, is one of the very best at his position in the commonwealth of Kentucky. Frankly, he easily could have been on this year’s sophomore All-State football team we published January 22, 2020.

Why wasn’t he? Well, we screwed the pooch. We missed. What can we say? It happens.

One thing is for certain; people who evaluate football talent in Kentucky won’t be missing on this kid in the future. He’s just too good!

Mason is a kid college coaches really crave. For starters, the rising junior already has registered a 24 on his ACT and carries a 4.0 GPA. He’s a NCAA Clearinghouse no-brainer.

He has the bloodlines. His father, Marty Moore, not only is on the coaching staff at LCA, but he played linebacker in the NFL (8-seasons Patriots/Browns), is in the University of Kentucky Hall of Fame, is a NFL Legends Director in addition to his coaching duties.

In the end, Mason Moore will be recruited because he is Mason Moore and not Marty’s son. Kids with his frame (6-0, 180-pounds and still growing), at his position (which most coaches believe will be safety), who move like he does (4.65-40-yard dash) don’t need to be anyone’s son to get recruited for the Saturday-show.

Mason had a great year for LCA in 2019. The sophomore started all 12-games for a team which may have been the best team in the classification in spite of dropping the district championship game at home to the classification’s State Champion, 28-26.

He was credited with 44-total tackles from his safety slot. He registered 3-TFLs, a forced fumble, and a fumble recovery.

Of course like any safety, he’s back there to defend passes and pick off aerials. He didn’t disappoint in either category. In fact, he lead District-4, Class 2A in interceptions with 6.

LCA figures to be right in the championship hunt again in 2020. They are KPGFootball’s favorite to win the whole thing.

We don’t believe Somerset, with the losses absorbed across its offensive front and the defensive first two levels, will get as lucky to get by LCA as they were in 2019. Not to mention the fact LCA has most of its prim- timers back and they are juniors this time and not sophomores anyMoore (pardon the pun, couldn’t resist).

Both Somerset and LCA will have Danville with which to contend. No team which plays football in “Title-Town” can be counted on to falter forever.

Any team which emerges from District 4 is very likely to be a favorite to go on and win it all. District-4 and District 1 (Mayfield, Murray High, and Caldwell County) are the best two districts in the 2A classification. The teams emerging from those two districts are like to see each other deep into the playoffs if not in Lexington, Kentucky.

It will be fun to watch and don’t be surprised to see Murray High come out of District-1. Regardless of which team emerges from District-1, we believe Mason Moore and his gang will emerge from the 4th-District and Mason will be back in that 3rd-level bringing the heat.