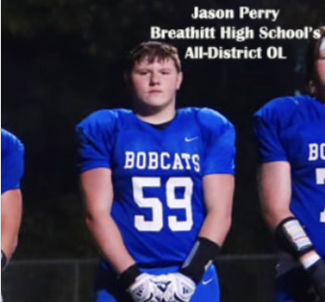 It’s not everyday a “Break-out” player is coming off an All-District selection. However, All-District is far from the goal for this particular ’24 prospect who entered high school among the most coveted prospects in his graduating class across Kentucky.

Now the 6-2, 280-pounder has always been strong, particularly for his stage of development. He’s pressing near 300-pounds and squatting around 450 right now and he’s not even a sophomore yet.

However, last year, at the beginning of his run along the front-line for the Bobcats, there were times when he looked “stiff” and “tight” which isn’t uncommon for young, strong bulls like him. He loosened up, as the year went along, which is why and how he got into the varsity starting line-up.

This year, his athleticism is flowering. We talked to head coach, Kyle Moore, about this prospect. Coach Moore told us Perry has clocked a 5.5-second, 40-time already this spring and that Perry, in addition to his other lifting numbers, is also power-cleaning 210-pounds. This says something about his newly-found explosion and athleticism.

Perry is a former Team Kentucky Future Star. He entered his freshman season at 250-pounds. He has added 30-pounds of “good weight” since and gotten both faster and quicker.

We also talked to our resident East-Kentucky contributor, Fletcher Long, about Perry. Coach Long told us, “This is a kid I researched thoroughly when he was a top-flight, middle-school player. He was a linebacker then.”

Long continued, “Perry is a monster. His weighing 280-pounds now, and clipping the 40 in the mid-5’s, makes him a real problem for first and second level opposing defenders. It also makes him fast enough to play along the defense’s interior front as a two-way guy. Both Perry and Teegan Smith, another all-state caliber player, will go both ways, or that is my pre-season prediction.”

We asked Long, “How good do you see him being ultimately?” His answer…

“Well, this kid has a tremendous work-ethic so the answer would be, provided he continues to put in the work along his present arch of development, the sky really is his limit. He has a D-I skill set, but a FCS-level frame, right now, because of his height. Frame in young players is fluid.”

“If he hits 6-3, he is a potential, Football Bowl Subdivision, offensive guard. I think his next-level future looks presently to be as an offensive lineman.”

“As he matures and becomes even more coordinated and faster, that too could change. He would make a fine Strong-DT in an even front as he appears more suited to holding the point of attack and refusing to be moved than he looks to be a hit the gap and pursue the ball type.”

One of the better things a scout can say about Perry is Perry carries a 3.2 GPA. We can’t stress enough that in these transfer portal days, keeping one’s grades high and giving teams recruiting a player multiple avenues, both academically and athletically, to ‘make it happen,’ is becoming increasingly important.”

We agree with Coach Long (news flash) at the magazine and contend this is a next-level player here. He is also an early favorite to make one or more All-State teams at year’s end.

We can promise you this, as AP-voters, we’ll be keeping track. You can count on that!