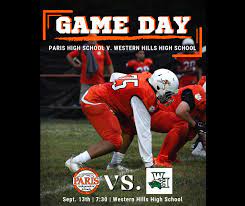 Isaiah Villar is a guy whose stature would seem to be everything for which a college coach could ever hope at the WR/S/CB positions. We want to say, right off the bat, we don’t think he’s a corner at the next level regardless of whether the Greyhounds play him there or not.

He has plenty of length and his frame, 6-3, 195-pounds, is ideal at the WR/S slots. We could see him putting on some “good weight” on the college level, at a college’s training table and in its weight room, and growing into a LB/Stand-up, DE-type.

Villar was a ’21 all of last year but lost the majority of the season to injury. He only got to play in 2-games.

He has elected to “Re-Do” his senior year. It is difficult to conceive of any player for whom this new rule would be of more benefit.

We know Paris High School is thrilled he is getting another bite at the apple. So are we.

Villar’s two games worth of production was noteworthy in ’20 for it being only two-games. Offensively, he may have caught just the one pass, but he took that aerial 69-yards for a score.

Have you heard the saying, there are no small parts, just small actors? Point is, when given the opportunity, he did what he needed to do, he found pay-dirt.

Defensively, Villar registered 8-tackles and a TFL. Projected out over an 11-games season, 10 regular season games and a round one playoff appearance, Villar would have garnered 44-tackles, 11-TFLs, and the discussion concerning him would have been vastly different.

We deserve as a fanbase to see what the young man can really do and that is why he has opted to reclassify. He deserves to be given a chance to play and to show the entire world, next-level recruiters included, of what he is capable.

We believe Villar will have a “Break-out” season for his Thoroughbreds. We would like to see him pound this offseason, work on his explosion and speed, and piece together a skill-set which will accentuate his frame and explain to college recruiters why he needs to be given a next-level opportunity to shine.

We believe he will do all of that. We believe this is a player from whom we will hear quite a bit in ’21.