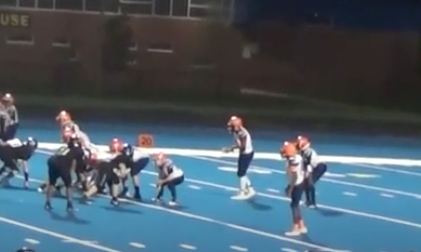 At KPGFootball, we love to be the first to discover football talent around the Commonwealth of Kentucky. Of course there’s a reason no one can beat us to the punch. First, we do nothing but cover football, year-round, so we are perpetually on the hunt. Secondly, we are the only media outlet even covering Class of 2024 talent in football.

We have told readers about Cole Hodge, formerly at South Oldham and now at North Oldham, and what a phenomenal talent he is at the QB position. We have informed enthusiasts about Hopkinsville’s Joshuah Keith, the little 2024 QB who practically set the world on fire at this year’s Bret Cooper Junior All-American Game in Dallas, Texas. Well, better add the following name to the list…Jordan Miles.

“Hey, KPGFootball, what kind of frame does the kid have?” Well, he’s 5-10 now with long arms, a high waist, long legs, and narrow across his shoulders. Let me physiologically translate for you…he’s not done developing and will add both height and heft to his 140 present pounds. The fact he’s not an “early developer,” an undeniable anatomical fact, sort of illuminates (even more brightly) the 250-pound back squat and 4.7 second, hand timed, forty-yard dash time, doesn’t it?

On the field, what can we tell you of his performance. After all, middle school statistics (even if kept) are almost never entered anywhere online permitting access. We have talked to his head coach at Browning Springs, Tyrone Gregory, who tells us the kid had multiple 50+ yard scoring runs from QB, in 2018, playing Franklin-Simpson Middle. That is just in that one game. According to Coach Gregory, he starred in similar fashion all season.

Stats or no stats, the kid was a good enough athlete and football player to make “Team Kentucky’s FBU Elite Team” as a receiver. Check out this highlight and tell us whether you would play this dual-threat nightmare at QB on your MS team. Yeah, we thought so…so would we.

In an age where the name of the game in football is versatility & vertical explosion, agility & speed, strength & power, this kid is a virtual skill-set, one-stop shop. “Jordan Miles” is a name, going forward, about which KPGFootball is willing to bet we haven’t just spilt our last bit of digital ink.