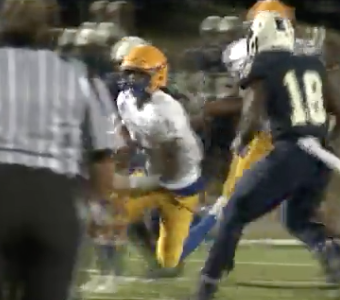 KPGFootball strongly advises against staring at the featured photograph attached to this article for too long. Don’t attempt to adjust your computer monitor either. The problem is with the picture and not your equipment. It is hard to take an action photograph of an ever-moving target.

Latrel Riley-Murphy is a human blur, perpetually hunting the football in a defensive backfield similar to how an electron is attracted to a proton in an atomic nucleus. Riley is drawn to the aerial sphere as if the football contained some electromagnetic force.

You may be wondering, “Who the Hell is Latrel Riley-Murphy?” Name doesn’t sound familiar, you say? Well, KPGFootball is happy to inform you as to whom he is exactly.

Well, he is the guy just selected First-team, All-State in Football, at DB, by the Associated Press for 2018. While the name Latrel Riley-Murphy may not be recognizable in Kentucky High School football circles, KPGFootball bets you have hear of Trel Riley!

Trel Riley is a 6-1, 170 pound, ball-hawk of a corner with plus length, off-the-charts athleticism and vertical explosion, with high-end, back-end, closing and “get on top of the vertical pipe” speed. In 2018, with everyone on Caldwell’s schedule throwing it anywhere but at Trel, Riley still turned in 34 tackles, 1 TFL, 1 fumble recovered, 5 interceptions, the five of which were returned for 78 yards, to go with his offensive and special team’s contributions. In 2017, Trel had 56 tackles, five interceptions, a pick-six, and forced a fumble.

Where Trel goes next is anyone’s guess as he holds several D-1 offers which include Western Kentucky, UT Martin, and Tennessee Tech. There is, we have heard, other FBS level interest in Riley’s services which is waiting to be reeled in by the talented, back-end prospect.

There is a reason why Trel Riley has been so abundantly honored throughout his high school career, as well as why he has a skill set likely to net a very fine career on Saturdays. The reason is simple: there are (very) few corners whom can be trusted to defend the slants, hitches, and comebacks while having the range and speed to still lock down the deep sideline or post routes. That being said…LaTrel Riley-Murphy is “that guy.” So is Trel Riley!