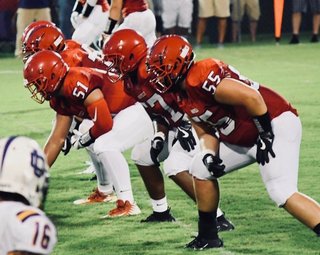 One hates to play favorites, but, truthfully, there are players in a sports writer’s coverage sphere he just likes better than others. KPGFootball are HUGE Barrett Henley fans. That is why we nominated him for the Associated Press, All-State Football team. That is why we voted him, first team, on our ballot. That is why we are so thrilled he made the All-State, 2nd team (AP), this year.

Let me start out by saying the difference between the AP’s first and second team, along the two offensive fronts, is non-existent. This writer, who has coached that very position group, would be thrilled to rock up front with Parks, Young, Wolford, (Sam) Vaughn, Henley, and (Jordan) Vaughn (the “2nd Team” OL) just as fast as rolling with Bowles, Hudson, Long, Cox, and Randolph (“1st Team”). It wouldn’t take a defense long to figure out our game plan either.

Any defense would have to heavily populate “The Box” if it wished to stop either unit from “moving meat” and running the football repetitively down the field. While it’s fictional, and there won’t be a game played where these players all play together along the same front, it’s fun to imagine how a defense would be forced to align just to avoid being “roller-skated” into its defensive backfield. Against either front, a DC may want to break out the antiquated “Wide-tackle 6”, or even the “Diamond 7” alignments.

Henley is what all schools want along its front and that is a superior, big-bodied, brutish yet still nimble-footed athlete. Henley is 6-4 and weighs 295 pounds. He has excellent core strength and plays with his hips sunk and his leverage low in spite of his height. Henley has active hands with a strong punch undoubtedly developed both in the strength & conditioning program he undergoes offseason together with his training as a State-Champion “Field” athlete on the Track & Field team.

Now the rub against linemen who play for teams which heavily favor the ground game in its offense is those linemen enter college having to learn how to pass protect. Offenses which rarely throw it don’t develop the best “kick and draggers,” if you will. That shouldn’t be a problem for Henley, who played LT for a Cardinals’ offense which ranked among the most balanced attacks in Kentucky high school football.

Mayfield, in route to 14-1 record in 2018, gained 2,711 yards rushing while throwing for another 3,327. The team scored 699 points in its 15 games operating behind a front which had two Henley’s slotted. Barrett’s brother, Lucas, started for Mayfield at center.

Barrett has signed to play next year for the Murray State University Racers, who are coming off a year of resurgence in its football program. Murray, in 2018, while projected to finish last in the OVC, preseason, turned in a 5-3 conference worksheet, good enough for 4th in the 9 team conference. Signing players with the ability and athleticism of Barrett Henley is a sign Murray State’s climb to conference championship relevance is sure to continue.