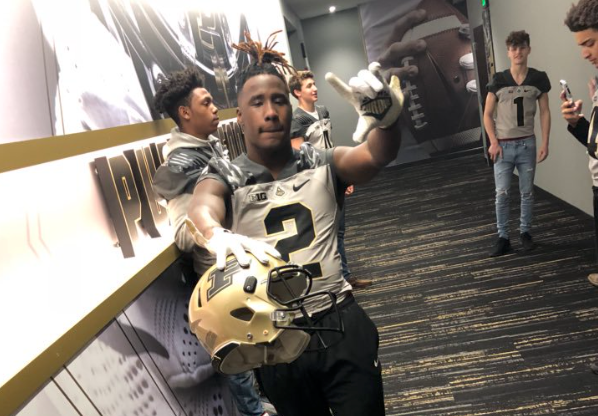 Continuing our on-going coverage of KPGFootball players (and by that we mean players either in our coverage area or who we have before covered) who have made the Associated Press’s All-State Football team. Today, we get to cover another of KPGFootball’s favorite players in this article about the player known by some (but not by us) as “the other Riley.” Today’s article is about Jameer.

Now, absolutely no one will ever confuse the two Rileys, who are cousins. Trel is the more flamboyant and outgoing of the two. Jameer is the more understated and introverted. Now there is a term which is referenced in the title of this piece. That term is “panache.”

“Panache” is defined as possessing a certain dash or flamboyance in either style or action. There is another meaning too, and the older definition is how “panache” came to mean, in today’s vernacular, what it does.

In medieval times, “panache” was the ornamental tuft of feathers on one’s battle helmet one wore with his suit of armor. At KPGFootball, we aren’t saying Jameer Riley lacks any dash or flamboyance in either style or action. We have seen the young man exhibit great personality and style over the past several years. When it comes to football we are suggesting, when Jameer Riley hits you, one discovers (a bit to one’s chagrin) one hasn’t been struck by any ornamental tuft of feathers. You have been struck by an iron helmet.

Jameer Riley is 5-10 and is listed as weighing 201 pounds. Jameer is really thick and chiseled and KPGFootball wouldn’t “turn around” to discover Jameer actually weighs between 210 to 215 pounds. He played safety at Caldwell County and made the AP’s All-State 2nd Team on defense (DB). While KPGFootball has seen Jameer forecast to play RB, we can easily envision his playing either WR, OLB, or even MLB at the next level.

In 2018, for the Caldwell County Tigers (8-4), Jameer, from his safety position, had 31 tackles while forcing two fumbles. On offense, Jameer accounted for 628 yards receiving, in 36 receptions, with 6 TDs in 12 games. Jameer also rushed the football 61 times for 336 yards (5.51 yards per carry) and scored 5 rushing TDs.

We don’t know exactly where Jameer’s considerable skill set lands him in college. We can’t profess to forecast at what position he will be deployed or even on what level of play.

What we can tell anyone reading this is Jameer Riley is a Division I college football player. Jameer possesses D-I size (where he would be likely to align), speed, strength, power, and explosion.

Jameer Riley reminds KPGFootball of Christian County’s Kendarius “Coco” Major who was one of Kentucky’s most undervalued prospects in its 2016 class. Major left the Colonels in 2016, matriculated to Purdue University, and has since rounded into one of the finest DBs in the Big Ten Conference if not the country. Incidentally, Purdue is taking both a hard and long look at Jameer, which if the “Coco precedence” has any value, is well warranted.