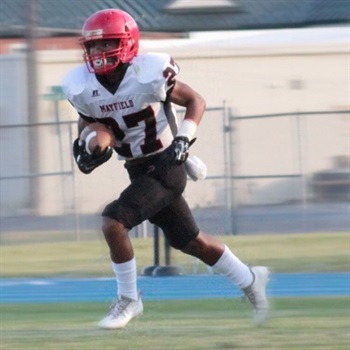 Whether or not you are one of Kentucky’s most successful and storied programs, whether or not you are the “King of the West,” no program easily absorbs the loss of a QB like Jaden Stinson. Stinson completed 174 of his 272 attempts for 3,506-yards with 48-TDs against only 10-picks in 15 games. What does that QB-rating look like?

His replacement, Zane Cartwright, was a freshman in 2019 and has promise. Promise aside, he is still untested at the varsity level and hasn’t proven he can do anything at that level yet.

Stinson was far from the only casualty to graduation the Cardinals suffered offensively. When you consider what portion of the offense’s overall production these players contributed in 2019; well, it is just staggering.

What does all of that mean? Well, if you are a member of the Cardinal legion it would seem the comment, “Thank God we still have Kylan Galbreath coming back” should have either been thought or said by you, by now.

Galbreath is a 5-9, 170-pound running back in the mold of what we don’t often see in the western end of Kentucky but have seen every so often. He harkens back to running backs like Mark Higgs (Owensboro), James “The Hammer” Boyd (Hopkinsville) who both tore it up in the 80s. He reminds others of backs like Fulton County’s Caleb Kimble (2020) and Franklin Simpson’s Tre Bass (2019) if you are looking for a reference a bit more recent.

Galbreath is coming off a whale of a year. Galbreath gained 1,575-yards, in 190-carries, and scored 18-rushing TDs in 2019. With the losses to graduation, he will be the team’s leading returning receiver when summer camp finally convenes. He may also be its only returning, legitimate offensive weapon.

Defensively, the picture is much rosier at least in the defensive second level. Jax Rogers, who made the All-State football team as a sophomore, including ours, had 125-tackles in 2019. He returns. He may be the best LB in his graduating class.

Rogers has two very capable classmates joining him in Daniel Coles and Derek Stewart. Together they were 3 of Mayfield’s top-4 tacklers.

Still, the Cardinal defense absorbed its losses too. Markeacio Jackson has graduated and he was the team’s second leading tackler.

Now Mayfield plays in a tough district. It is by far the toughest district in its region and classification and not just because of Mayfield. Perennial toughies, Murray High (who is loaded) and Caldwell County have to be overcome just to see round-3.

So, what does all of this mean?

Well, Kylan Galbreath is a cornerstone around whom any team can build. Same is true of Jax Rogers on the other side of the football.

If you are a “championships are won running the football” guy, having back the leading rusher who knows what to do with it once he gets it has to provide some hope. That would be ample reason for an optimistic outlook.

Still, Mayfield was Kentucky’s most versatile and balanced offense a year ago. Much of the throw-game will be both untested and unaccomplished, at least so far.

We don’t believe it was “the system” and not Jaden Stinson either. You don’t get QBs like Stinson often, which is why he will play D-1, college football this coming Fall.

KPGFootball believes Mayfield may struggle some offensively, especially without having a Spring to work out some of the kinks, with Cartwright under center. We do believe the Cardinals will do what they always seem to do and get it rolling at the right time.

Is Galbreath enough to ride all the way to Kroger Field? Maybe. We suppose only time will answer that question.