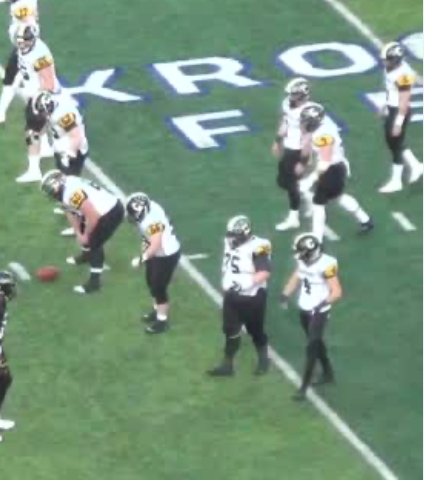 He’s been one of our favorite players since his days on Team Kentucky Future Stars. The kids called him “Gooch” in those days. We have, over the years since, added “The” to his title. Around KPGFootball’s offices, he will always be “The Gooch” to us.

Well, Hunter Scott has developed into way more than a guy with a super-cool nickname. I am willing to wager there wasn’t a single player aligned across from Johnson Central’s fixture at left tackle last year, on its run to the Class 4A Kentucky High School Football Championship, who found The Gooch the least bit funny.

No sir, after having watched his highlights (See link in blue below the picture of The Gooch holding the Championship Trophy), old Coach Lyon had a headache. He was a virtual one man International House of Pancakes a season ago.

Now the gold standard in high school offensive line play in the commonwealth of Kentucky, usually, is the line deployed by the Eagles of Johnson Central. They were that in 2019 as well, our apologies to Breathitt’s Big Blue Wave.

The Eagles had a (now) college football player at center in Andrew Clifton, a FBS-Power 5-guy in Grant Bingham along the front. The Eagles also boasted a KPGFootball (Sophomore team) and AP All-State First-Teamer at guard in Owen LeMaster and a FBS-guy at TE in Zach Russell. The other guard, Cameron Willis, is a championship wrestler, making up for what he lacks in size with pluck and fight.

With that being said, there wasn’t an anymore destructive first and second level demolition, bull-dozing of a lineman across the Eagle front than the 6-1, 310-pound, road grader positioned at left-tackle. Yeah, there is just no beating The Gooch!

Scott manned the left tackle post for the Eagles. With him thusly employed, Johnson Central ran for a shade under 5,000-yards (4,968), in 680-carries, and scored a Kentucky leading 74-rushing TDs. The team averaged 331.2-yards rushing a game over 15-games. The team averaged 7.31-yards a carry in 2019 with everyone in Kentucky knowing full well what Johnson Central was going to do and stacking the box to try to stop it.

Russ Grimm once remarked the most wonderful thing about playing offensive line was the ability to move grown men from point A to point B where he didn’t want to go to point B. That is the essence of Offensive Line play. That is why Grimm in enshrined in the NFL Hall of Fame.

Some coaches have called O-Linemen Meat Movers. Whether you realize it or not, that comes from the famous Russ Grimm speech he gave the day he went into the Hall.

Hunter Scott is the ultimate Meat Mover. When he is done getting his Meat moved over to Point B, Scott likes to deposit them onto the turf, lying in some sort of face-up sprawl of a “spread-eagle.” The Gooch leaves D-Linemen looking like cockroaches having just discovered the purpose of the aerosol can with Raid on the side.

We believe Hunter Scott is in for a huge year in 2020. With the returning supporting cast, especially upfront, it is hard to imagine this team won’t easily absorb any of its backfield losses. Andrew Clifton will be missed at center, but Hunter Scott is a kid who probably should have been at center this whole time anyway.

Regardless of where he finds himself in 2020, Johnson Central will continue to do what they do. They will run the football right down your throats. You will (once more) be powerless to do anything about it.

It will be a season long, down-hill, total-ground-onslaught. It will resemble an avalanche in pads of humanity. Our man, The Gooch, will be right in the thick of it.