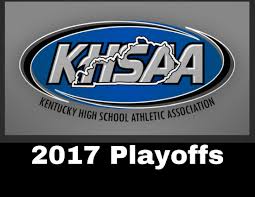 I have asked a friend of mine, Coach Dain Gregory, formerly an Assistant Coach at Hopkinsville, Trigg, and Logan County, among other stints, to break down what he believes to be a possible second round KHSAA Playoff upset. I am going to do the same thing. Now, listen, I tried to explain this last week and caught some guff from subscribers about my selecting Owensboro as a possible upset over the Purples of Bowling Green which, BGHS won 48-14. Neither Gregory nor I are saying our upset picks WILL win, we are just saying our picks MAY win. I am sure if we were wagering, our picks might be different. Oh yeah, for the record, in my article Upset City, I correctly picked Hopkinsville over Warren East, Greenwood over Owensboro Apollo, and Davies County over North Hardin. Out of seven predicted upsets, I went 3-4. That’s pretty good picking all under-dogs, so let’s ease up on some of the chastisement. I am going to analyze one game and Coach Gregory is going to take another one. For my game, I am going to pick Davies County to upset McCracken County in Paducah in the 6A Classification. Here’s why:

The problem with the Panthers from Davies County, if we are being totally honest here, is that their Defensive line and line-backers, traditionally, have been unable to stop a Marching Band. That shouldn’t be interpreted as meaning they can’t win this game, however, as they are sure to score some points on a McCracken Defense which gave up 40 points to Davies County when the two teams last squared off in Paducah, Kentucky on October 6, 2017. Davies County’s QB is named Joseph Cambron and that is a name we might do well to remember. He has waited his time to get to man the position and this is his first year on the first team as a Junior, but he has thrown for 3,513 yards and 46 passing TDs against 10 picks. On the year, Cambron has completed 185 passes of his 339 attempts. His primary target is a kid who may be pretty close to leading the Commonwealth of Kentucky in both receiving yards and TD catches in Marquel Tinsley. Tinsley caught 61 passes during the regular season for 1,349 receiving yards with 21 TD receptions. Of course the 6’2″ 210 pound WR, CB has a vertical leap of 34 inches, Squats 435 pounds, and has a registered 40 time of 4.6 seconds flat, making the 2019 standout someone Division I colleges are already courting heavily. McCracken is short in stature across its Defensive back four, especially at two of the four slots, so that is a match-up which will virtually insure Davies will get to the end zone and with some frequency. Defensively, Davies has got to find away to get McCracken’s offense off the field, and I don’t mean just letting them score.

This particular McCracken team has forced Coach Marc Clark to do something this year the former QB at Bowling Green High School doesn’t prefer if he has his druthers, and that is run the football. On the year, TaeShaun Allen, a transfer from Union City, Tennessee, has blossomed into one of the best unknowns in the Western half of the Commonwealth. In the October meeting between the two teams during the regular season, Allen accounted for approximately 300 yards rushing from scrimmage against the Panther Defense. Remember my line above concerning stopping a Marching Band? TaeShaun Allen ain’t no tuba player! On the year, Allen has gained 1,165 yards on 170 rushing attempts for an average of 6.85 (and some change) yards per carry. The entire Mustang rushing attack has gained 1900 yards on the year making Allen over 61% of the entire ground game. As a team, the Mustangs have averaged 4.92 yards per rushing attempt over 386 carries and that includes the 6.85 per carry Allen is gaining. In a move which wasn’t too popular with everyone in Paducah, Elijah Wheat, the Sophomore took the QB job over for good over Junior, Max Howard, as the season progressed. Wheat has thrown for nearly 1,600 yards and 16 TDs against 9 picks since then and has performed well. However, McCracken never beats The Blue Tornado in the season opener without Max Howard. Skyler Mayes has ravaged opponents from his H-back position working down the seam in the passing game and McCracken’s most talented receiver, Lawson Parrish is healthy and a go for this second round game. Parrish leads the team with 31 receptions though only playing in 8 games.

The Final Analysis: Usually, when handicapping play-off games, you are pretty safe to go with the best defensive team. What do you do when both teams are way more skilled offensively than defensively which is the case here? Well, that’s a tough one. This game will be a high scoring affair and may turn out just as the first, with 96 points scored and McCracken surviving to journey further. However, Marc Clark has never, as a Head Coach, coached a team past the 2nd round of the KHSAA playoffs, though he has been favored in the second round a few times while at HHS. If Davies County can keep Allen under 200 yards rushing and contain Mayes and Parrish, they can score enough against McCracken to pull the upset.

Primed to be Upset: McCracken County

Any way, since its the playoffs and all, I suppose the only thing left for me to say is…this is Fletcher Long reporting for Kentucky Prep Gridiron reminding you to PLAY THROUGH THE WHISTLE!

Other potential upsets: 1A Russellville over Campbellsville; 2A Monroe County over Lloyd Memorial; 3A Paducah Tilghman over E-town; 4A Madisonville-North Hopkins over Franklin-Simpson; 4A Hoptown over Logan County; 5A Anderson County over Madison Southern; 6A Henderson County over Central Hardin.