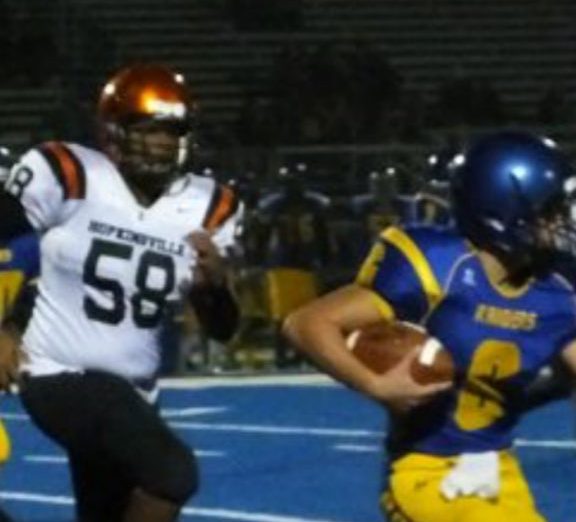 Just who in the Hell do the Hoptown Tigers think they are? Don’t they know that every star from off their 2016 team is gone via transfer, graduation, or quitting. I mean, come on man, their quarterback and two-time District Player of the Year transferred to an Academy in Louisville to play basketball. Their top TD scorer quit the team. The only returning starter on the offensive front quit the team. The top returning rusher got injured pre-season. One of the team’s top tacklers and defenders, through its first four games, got hurt on the opening kick-off of the fifth game of the year and has missed the rest of the season. Their top freshman DB prospect and best back-four defender died tragically. They start an entire offensive line none of which had taken a varsity snap prior to this year and one of whom is a freshman (for crying out loud). Finally, one of the top inside technique players is a basketball manager, style coach, amateur rapper, and barber nicknamed Pork Chop. This has got to be a joke. Well, here’s the thing; no one in 4A is finding it very funny, at least not anymore. Matter of fact, this young Tiger team has won four straight games including beating a Greenwood team 31-6 the week before the Gators went on the road to Owensboro Apollo, in the 5A KHSAA playoffs, and downed Apollo 51-31 and beating a very good Warren East team on the road in Bowling Green 21-7 to open its own Play-off journey. Well, there are 16 teams still enjoying the privilege of playing football in Kentucky’s 4A Football Classification at the time of publishing this article and one of those happens to be Keysean Pork Chop Palmer’s Tigers.

Keysean Palmer was a hard kid for me to figure. Oh, he is really funny. I remember one Basketball scrimmage game, Palmer streaking across the Court, in the middle of the action, dressed in some white linen suit with ruby red shoes. He was hard to miss. I thought, man what a clown and I don’t mean that, at all, negatively, as I like clowns and love Keysean Palmer. I am a clown myself, we appreciate our own. One had to notice however that Palmer, though clowning on that particular occasion, possesses quite a football physique. Palmer is 6’1, 240 pounds and very active and athletic playing on the front end of a Tiger Defense which has allowed all of 6 points in its last four games total.

Now the Tigers run a 4-3 Defense primarily, though it certainly runs out of many different formations utilizing both even and odd man fronts. Still, basically, the Tigers employ a 4-3 defense. Palmer has registered 12 tackles, nine of which are solo, and many of which are tackles for loss. However, as any true football aficionado will tell you, in the 4-3 a down lineman’s number of registered tackles doesn’t tell much about how an inside technique guy has played. If the front does its job well, the LBs should be free to roam to the football and make plays. The LBs are supposed to make the tackles and not be dodging OL climbing to the second level to block them. If Palmer and his line mates are playing well, hard, and with good technique, the LBs should be the Defense’s leading tacklers. Looking over the stats for the Defense, through 11 games, JaKevis Bryant leads the team with 53 tackles, 33 of which are solo, second is Andrew King with 47 tackles, 30 of which are solo, and third is Conner Lackey with 43 tackles, 25 of which are solo. Bryant, King, and Lackey are the LBs, so…mission accomplished.

Look, here’s the bottom line, one can laugh at Palmer’s crazy antics because the kid is really funny. One can either rap along with some free-style lyrics he lays down or even get his fade freshed in the locker-room before the game, as the kid is a good barber too. None of this takes away from the fact he is a good football player who is strong, explosive, and athletic and really playing, right now, the best football of his High School career. He’s not just a basketball manager, a style coach, a barber, a lyricist, a rapper, a comedian…he’s a football player. At Kentucky Prep Gridiron, we can assure you opponents are finding him less and less funny all the time.

Reporting for Kentucky Prep Gridiron this is Fletcher Long reminding you to PLAY THROUGH THE WHISTLE!