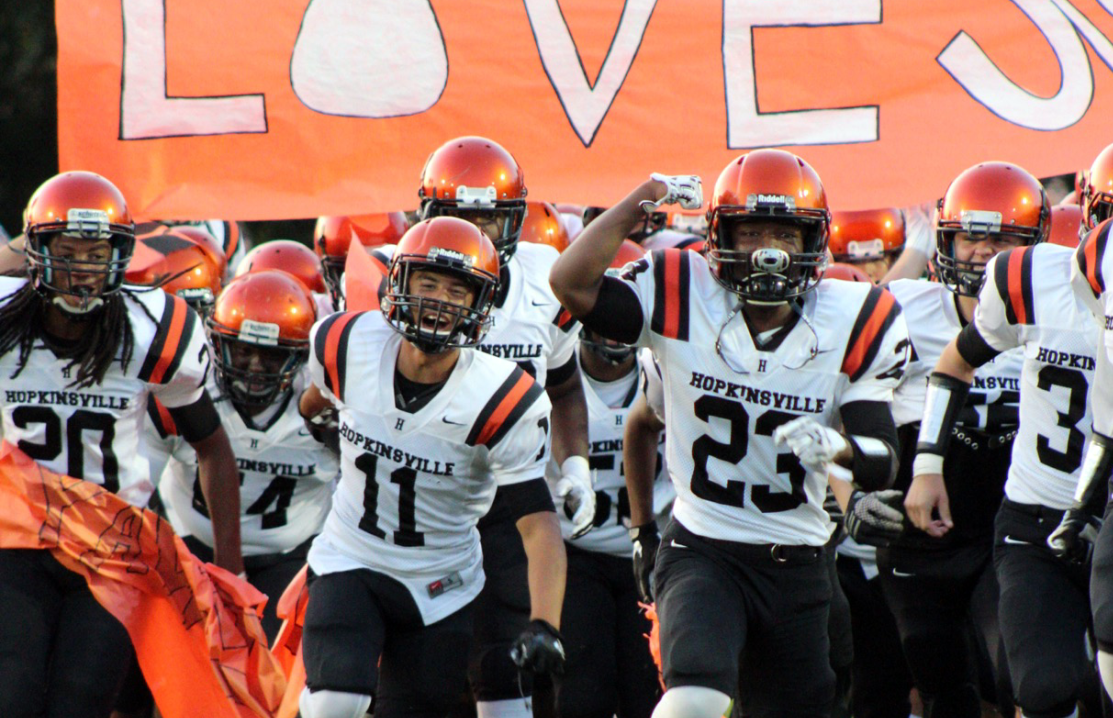 Etymology is the study of the origin of words. That definition of etymology may not be completely accurate but the gist is basically on target. It was one of my favorite subjects in College as my undergraduate degree was in English/Creative Writing and, as free-spirited and permissive as Universities tend to be, I wrote an upper-division term paper on the etymology of the f-word which one may find fascinating. I would never reprint it here as this isn’t the appropriate forum for that discussion. Regardless, this edition of the HHS Tigers has come to the point where it may accomplish an unprecedented level of reversal of fortune. This team is becoming a story; an ESPN 30 for 30 level story. Maybe even a Remember the [Tigers] feature film type of story. It’s getting time to christen HHS with a name which identifies the 2017 Hopkinsville High School Football team as singular and special. You know a name similar to the 1965-66 edition of Adolph Rupp’s UK team (Rupp’s Runts), or General Neyland’s 1928 football team (Flaming Sophomores), or something along those lines. I would like to suggest the 2017 HHS Tigers should be referenced as Clayton’s Cubbies.

Now you may incorrectly believe, as I did before researching for this article, that a young Tiger is a kitten and not a cub. If one employs the methodology prescribed by etymology you will see our error. You see, the word kitten comes from the Old French word chitoun which is the diminutive form of chat, the French word for cat. A diminutive is a word which describes the small version of something. The word chitoun means small cat. The young of carnivorous mammals, however, are referred to as cubs which is derived from Old English usage of unknown origin but which dates back to the 16th Century. Therefore, young bears, lions, TIGERS, wolves, and foxes are all cubs.

Early in the year, Coach Clayton, being interviewed by either the radio station covering the Tigers or the Newspaper, which one I don’t remember, commented that Hopkinsville High School had the best JV football team in all of Kentucky. The only problem he lamented is that his JV was playing Varsity football. When Clayton’s Cubbies rolled out of the gate 1-6, losing on the last play of the game at Logan County, themselves the third undefeated squad the Tigers had played among its first seven opponents, I wondered about the wisdom of scheduling as ambitiously as we had. I remember walking off the field after Logan’s QB had found the end zone on the game’s final play to down Clayton’s Cubbies 13-12. EJ Austin, whom would tragically pass away the next day, came up to me and said Coach, I lost the game, I should have made the last tackle. I told EJ, a player who I not only loved as a son but whom I had coached in middle school, what any coach would, and something entirely true, that no one player or one play ever loses a football game.

When I went back and watched the film, it wasn’t a missed tackle by EJ at all as EJ was in coverage on the play, as he should have been on a roll-out with a run/pass option. EJ was playing his assignment and would have had to leave his assignment to come up and play the QB keeper which would have left his receiver naked in the end zone. EJ stayed in coverage until the QB crossed the line of scrimmage and then broke toward the QB to make the tackle in space. He just couldn’t have gotten there any faster than he did. The Ezell kid (Logan’s QB) just made a better play than we on that occasion…it happens, learning to move on and not let it impact your play going forward is part of the life lessons football is intended to instill.

Nevertheless, it wasn’t EJ’s statement to me that he believed he had failed on the deciding play on October 5, 2017 which played through my mind last night in the second round of the KHSAA, 4A football playoffs. As I sat there and watched Sophomore, Jay Bland, a QB who had been 1-15 for 16 yards passing on October 5, 2017 go 5-7 for 169 yards passing and 5TDs last night, as I watched a team which could only muster 4 field goals on October 5 out of 4 trips inside the red zone score TDs on five consecutive plays, and as I watched a team that had lost 13-12 on October 5 lead the same oponnent, 11-0 (at the time) Logan County, 43-0 with 7:27 to go in the 2nd Quarter, it wasn’t what EJ had said to me which replayed in my mind but what I heard EJ had said to Coach Dustin Lopez after the game…Coach, we won’t lose any more…

I can’t possibly forecast whether Clayton’s Cubbies can complete the seemingly impossible in-season turn-around of coming out of the gate 1-6 to finish 9-6 and crowned State Champions. I know that sitting at 6-6 now, heading into a Regional Championship Game against a spectacular Franklin-Simpson team which played for the 4A State Championship just last year, makes the story-book 9-6 finish look much more attainable than it appeared when we left the field at Logan County the evening of October 5 with a 1-6 record. I know that these Tiger Cubs have been patiently tutored on the art of survival by a coaching staff manned by grizzlied veterans of many a play-off run.  I also know that, in an instant, a Tiger cub, though cute when young and seemingly innocuous can quickly morph into something frightening, chilling, and terrible. Have Clayton’s Cubbies morphed into ravenous, carnivorous, killing machines, like an adult Tiger? I don’t know, maybe the spirit and ethereal presence of their fallen comrade is making them pre-maturely, mature. If that is the case, and it appeared to be, at least last night, than what EJ Austin told Coach Lopez may actually come to fruition. Clayton’s Cubbies may not lose again…wouldn’t that be something worthy of both posterity and a kitschy nickname?

This is Fletcher Long reporting for Kentucky Prep Gridiron reminding Clayton’s Cubbies to PLAY THROUGH THE WHISTLE!