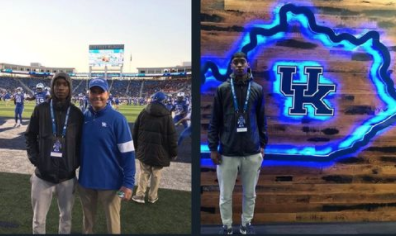 He’s been thought of as one of 2021’s top football prospects since his being in 7th grade at Russellville Middle School. His high school career has only enhanced, and not dampened, that particular perception.

Rooster Woodard (depicted at WR in the Kelly Phillips’ photo to the right of this paragraph), as he is known throughout high school football and basketball Kentucky-wide, is a prospect in both sports. He is explosive, incredibly athletic, and versatile.

In middle school, he was a highly regarded QB. He hasn’t really played QB since then; but slings a howitzer from his right shoulder should the need arise.

In high school he has been a WR/DB phenomenon. As a college prospect, he would be termed an “Athlete.” His versatility is one of his more pronounced attributes. It is one of the things which make him so recruitable.

Although in a losing effort, so rendered by a single, solitary point, Woodard’s versatility was on full display Friday night against Greenwood from Class 5A, District 2. In the pivotal early season contest, Woodard carried the football 9-times for 75-yards, caught a pair of passes for 33-yards and a touchdown, and picked off the defense’s only two interceptions. That’s called “getting it in” on both sides of the football.

Of note for the Greenwood Gators was the outstanding play from its defender, Lofton Howard. Howard had quite the game himself.

On the night, Lofton registered 20-tackles, two of which were behind the line of scrimmage. Mr. Howard may be a name some of you football fans out there should consider adding to your must see list of instate players.

So here we are in the commencement of the 2021-season and, for those of you who have subscribed to KPGFootball all this time, the players we were writing about and featuring when they were 7th-graders, and we first came on-line, are pretty much the same players getting featured today.

There is a good explanation for that. It isn’t we play favorites.

The players who were dominating the landscape in Kentucky football when they were middle-schoolers still are dominating, just on a different landscape. If you will recall, this is why we came online in the first place opining that middle school football, on the Kentucky-wide level, was worthy of both coverage and patronage.

We feel the experiment has proven true over the expanse of time. We feel incredibly exonerated.

We feel players we were featuring from the beginning, like old Rooster Woodard continue to take the field on Friday nights and prove we really knew about what we were talking and writing all along. We regret it took some of you five years to figure out what we knew instantaneously. Oh well, C’est la vie!