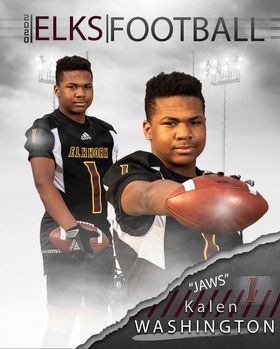 Mingua Beef Jerky Company and we want to award the distinction to as many players from around Kentucky as we can. This week was a good week to feature some of the best the middle school ranks had to offer. After all, the KYMSFA semi-finals were this past weekend.

While we want to spread it around, we will from time to time, as the information is available to us, update the reader on what former winners of the award have done in subsequent weeks, like the reader has seen us do in prior weeks. That being said, let the “race for the world’s finest beef jerky” commence.

Coby Bird from Breathitt County Middle School isn’t one of the names you’re used to hearing get publicity from off of that very fine football team. Usually the kids who made the KYMSFA, Division 3, All-Region squad get all the attention (Sawyer Hall, Kory Combs, Wesley Abner, and Brayden Johnson). However, Bird decided to be a real bright spot in an otherwise dismal performance for the Bobcats against Greenup County. Bird had 7-tackles deployed along the defensive front for the Bobcats defense in a 28-0 loss.

Someone who played really well in that game was QB/LB Tyson Sammons. Tyson Sammons had a hand in every TD scored on the day. Whether the shifty, run-first, QB playmaker was running it to pay-dirt himself, throwing it to a streaking receiver for a touchdown on 4th and 12 in the second half, or handing it off, He proved the scouting report accurate that to beat Greenup, you had to first find something to do with Mr. Sammons. Here’s the rub, Sammons also plays defense, at linebacker, and he was equally stellar on that side of the line of scrimmage Saturday.

How about the game Isaiah Stanley had for the Belfry Pirates on Saturday. Stanley has been a stalwart for his team all year both rushing and receiving. His production was no different against Owensboro Catholic this past weekend. Belfry won the game 28-22.

Owensboro Catholic was right there Saturday with the game never out of reach. Both programs enjoy tremendous success at this level of play. They both have darn good high school teams too. Go figure.

What a day Kalen “Jaws” Washington had for Elkhorn against Union in the Division I, semi-final. Elkhorn advanced to the State Championship game where they will have to play a Bowling Green team which narrowly bested North Pulaski on the other side of the bracket.

Washington carried the football 17-times for 457-yards with 7 TDs and 3 PATs on the day. That is 26.8-yards per carry and hitting pay-dirt over 41% of the time you are handed the football. Get this, the 5’9″ 188-pounder is also a standout at inside linebacker for the defense and is second on the Elks’ squad in tackles this season.

We were able to talk with Coach Ledford about Washington, who joins the “Flyers” next year when he gets to 9th grade. Ledford told KPGFootball, “Kalen is humble and encouraging to his teammates. He leads by example and out-works everyone on the team. His skill set as a runner is balanced with power and the violence to finish tough runs.”

Ledford went on to tell us, “He has excellent vision and cuts well with the speed to separate once he gets to the back-end of the defensive secondary.” Washington’s Elkhorn team beat Union 60-26.

We were able to catch up with Coach G.J. Wooldrige who not only coaches Team Kentucky FBU but is also the head man at North Pulaski. He was singing the praises of his star, Ethan Idlewine. Idelwine was a standout for a North Pulaski team which has made deep runs in the playoffs since bring Coach Wooldrige on board several years ago. Ethan lead North to the semis, where they dropped a nail-biter to Bowling Green. We suppose now Idlewine can help lead Team Kentucky to the FBU National Championship. Let’s hope so.