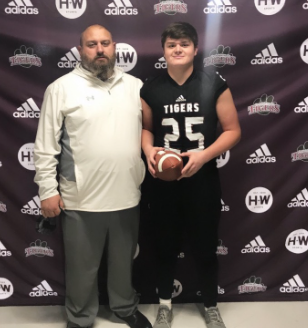 Yesterday was National Signing Day. For those of us who work in this area of sports reporting, it was our Super Bowl. Apropos since “The Super Bowl” happens to be this weekend.

We were glued to Twitter yesterday around the magazine attempting to chart where “our guys” were signing. We had a ton of guys signing too and were very proud.

We wish we could intelligently discuss all 17 of the Kentucky football programs inking Kentucky players with you. Not all of these programs were tweeting signatures yesterday and some of them are in places we don’t have too many agents to keep us informed. That being said, we are happy to give you some impressions about the programs we have been closely monitoring.

We are going to start out at Campbellsville University. We thought Campbellsville did very well yesterday and signed a lot of quality and players which met the program’s needs, largely because it would meet the needs of virtually any program.

The inked Broc Bridges, one of Kentucky’s premier players at his position (DE). They didn’t just stop there as they also pulled one of Kentucky’s elite HS QBs in Boyle County’s Jagger Gillis and a superior in-state “athlete” in Hopkinsville’s Donta Abren. We think one of Campbellsville’s more intriguing hauls came in the form of Alabaster, Alabama’s K’Marion Hambright.

Hambright is a 6-0, 285 DT who is 5.5 in the 40, 5.19 in the shuttle, a 325-pound bench presser, and a 700-pound squatter with a 26-inch vertical and an 82-inch broad jump. He will be an immediate force for Campbellsville and is one of the most imposing out-of-state grabs by any of the in-state programs. We would provide a picture but wouldn’t want to scare you.

Next we look at Lindsey Wilson. Linsey Wilson boasts one of the highest regarded in-state prospects in inking 247Sports.com and Rivals 3-star Parker Bates. Bates was rated the 18th-best overall college prospect in Kentucky’s 2021-class by both of the major national recruiting services. That would be a tremendous add were he a class of one.

Lindsey Wilson also inked big-time, high-school offensive lineman John Mudd out of Waggoner High School. Mudd will be joined there by outstanding players the likes of Jeremiah Belton out of LaRue County who led that ball club this past season in many key statistical categories. Keep a sharp eye on Kylan Galbreath out of Mayfield, Kentucky. Our experience is definitely that the Mayfield Cardinal bunch can flat ball.

We want to say something about Hanover College. Obviously, Hanover isn’t an in-state school but we interact with the school’s Kentucky recruiter regularly as he is all over the Bluegrass scouting and luring top-flight Kentucky talent north to Indiana.

His name is Justin Robinson and is known the Bluegrass over as Coach Jay. Coach Jay knocked it out of the park, particularly in Louisville Kentucky yesterday.

VJ Anthony and Christopher Forehand, Jr., the first from Male, the second from Trinity, spurned numerous other offers to pledge to the Panthers, both signing yesterday. That is the type incursion into Kentucky waters and success in luring top-flight talent which should at least bare mentioning.

Centre College scored an “A” on its test, were such things graded in that fashion. Of course, A’s are expected at Centre College; Kentucky’s elite academic institution of higher learning.

The Colonels identified adding some OL help in this class and inked hulking, 6A OL Jake Bruce to join the corp from Louisville’s DuPont Manual High School. One of the more intriguing prospects the Colonels lured from out of state is the man pictured to the right of this very paragraph, Gary Shepard, from Mitchell HS in the Tampa Bay area of Florida. Hauling in a quality, out-of-state offensive center from the Tampa area’s famous “I-275 corridor” makes people following recruiting stand-up and take notice.

Shepard, who’s highlights we thought to include, above linked under his picture, is a 6-0, 285-pound interior offensive lineman. He was a two-time captain of his high school team and a Florida football All-State HM (honorable mention), Class 7A twice. He was first-team all-conference both his junior and senior seasons. He benches 375, squats 530, power-cleans 260 and has a 3.75 GPA (of course, it’s Centre College). Looks like Centre may have found Jackson, Kentucky’s William Long a lifting partner.

Here’s the thing about Centre; it inked 21-players yesterday. They aren’t done. They have several big-timers still set to sign. They are killing it!

Kentucky Wesleyan also has assembled quite a class. They had some really big-time players sign with them yesterday.

Remember, signing classes with prime-time skills always seem to rank higher than when programs target “bigs.” We disagree with that; but hey, we aren’t here to re-invent the wheel.

Joey Cambron from Daviess County decided to stay close to home and inked with the Panthers. This is a big-time get at QB and a big-time QB will always heighten the impression of any class, ask Campbellsville (Jagger Gillis). Another big-time get for the Panthers is one of Kentucky’s marquee tailbacks in the class of ’21.

Jaylin “the Boss” Bross signed on yesterday. This gives the Panthers an instate running back who gained over 3,000 yards in his career against Class 6A, Louisville-area competition. The Panthers also scored out-of-state from an area of the country known for producing high school talent.

Kentucky Wesleyan signed Elijah Stewart out of Katy High School in Katy, Texas. Stewart is built similarly to Bross. Stewart is 5-9, 200-pounds while Bross is 5-10, 210, and they both have similar attributes embodying what Coach Yeast is obviously searching for at that position. They are both cutters with excellent vision and burst who run behind their pads with leverage and between the tackles with power with the speed to break away when they enter the open field and gain equality with third-level defenders. Both of these signees are striking similar to JaTorian Dillard, who was signed out of Hopkinsville, Kentucky just two-years ago.

That is what we have for you guys so far but we will continue to monitor the situation going forward and report more as it becomes known. Man, this way fun!