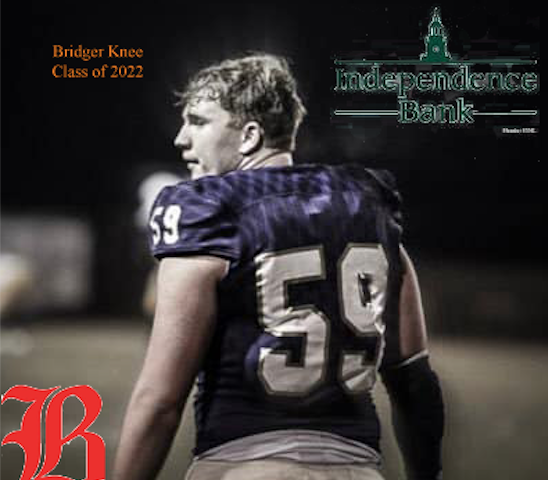 Independence Bank has a goal of achieving everyday excellence, and this week we are focusing on a player (Bridger Knee, 2022) who, quite frankly, is one of 2022’s very best defensive ends but who (sadly) is transferring to play his senior year at the Baylor School for Men in Chattanooga, Tennessee. He has won this award mulitple times and we couldn’t miss this opportunity to single him out one more time before he left.

He helped guide Bowling Green High School this past season into the Champion’s Circle in the State 5A title game in 2020. His ability and spectacular play helped lead to the program’s 7th title over a traditional, 5A powerhouse in Owensboro (Senior) High School.

Bridger Knee is a prospect we have followed since his middle school days playing for the prestigious Kentucky Future Stars program. He has developed into one of 2022’s most sought after and decorated players over his three years playing for the Purples, the last two of which he was in the starting lineup.

Bridger is an excellent student. That would explain the offer from the Ivy League’s Pennsylvania University as well as the opportunity to attend and play for the Baylor School.

He is also one terrific football player. His offers to play, next level, for both Ball State and EKU would certainly underscore that point. There just aren’t too many juniors in Kentucky, who have camped or combined between their Junior and Senior seasons, running around with three prestigious, Division I offers.

Bridger is destined for great things regardless of where he chooses to play in college. Students like Bridger, who are clever enough to see the advantages to developing as a student equally to his development as an athlete, have plenty of options we have learned, particularly this year.

Regardless of where his play should ultimately take Bridger, he will always be a Kentucky Future Star, a member of Team Kentucky, and a member of #Brotherhood. We are excited for him while being simultaneously sad to see him go.

Congratulations to Bridger Kness for his Revolutionary Play which has earned him this week’s recognition from the fastest growing bank in the Commonwealth of Kentucky…your friends at Independence Bank. Smooth sailing my guy!