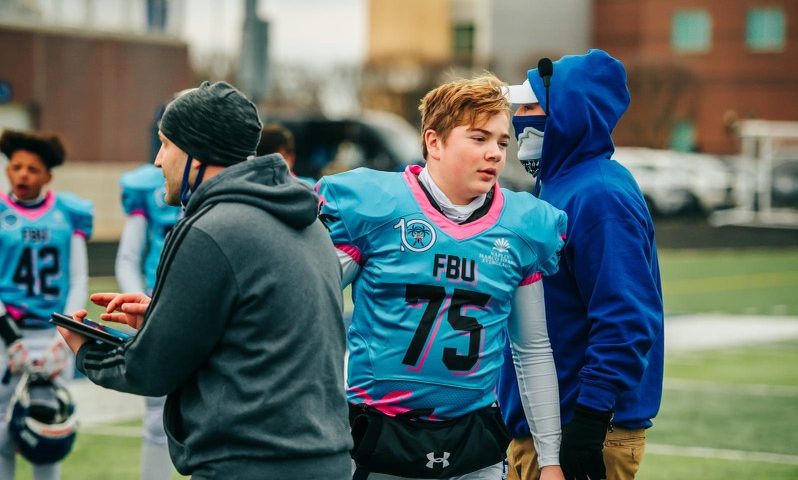 Zane Biever is an undersized but talented offensive and defensive lineman for Owensboro Junior High. He is down in Naples, Florida competing for the 7th-grade, Team Kentucky FBU Elite team. He is a 2026-prospect.

Man, football sure is a meat market, isn’t it? All you seem to hear about, when discussing prospects, is whether the kid passes the eye test. What about a player’s ability to pass the my goodness, that guy’s a dawg-test?

If there is a member of Kentucky’s 2026-class who can remind us that it isn’t the size of the dawg in the fight but the size of the fight in the dawg, it is 5-7, 161-pound, Zane Biever. Leave it to Beiver…he’ll show you what a football player really is.

Zane Biever is a dawg. Who says this? Well, for one Greg Brown; his coach at Owensboro Junior High School. Coach Brown has run a historical powerhouse at this level of play for years.

Who else says it? How about the Team Kentucky selection committee?

Have you ever seen a picture of Team Kentucky’s FBU-elite squad? Don’t tell me the eye-test isn’t a prerequisite for selection. Now, if you are “undersized,” and you make that team’s roster, then buddy; you can flat play.

We were talking to Coach Brown just yesterday. His praise for this player was effusive.

He told KPGFootball, “For those coaches who want to overlook this kid owing to his normalcy in the size department, they always come away from the game overwhelmed with his performance. He’s a playmaker on both side of the scrimmage line for us.”

Watching film on Biever, there are certain attributes which readily jump off the screen. For starters, he has very good first-step and must have good core strength as he plays at the level, and with the leverage, one wants to see a from a young lineman.

While the lineman drawing the duty of blocking him is standing straight-up, Biever is firing out and bending past the big-man, often before the larger offensive lineman is even aware of what is happening. He’s twitchy, he’s explosive, don’t see much of that in 7th-grade linemen.

Offensively, Biever really moves and is what we call, a multi-level blocker. He is a quick-footed, drive blocker who gets his cleats in the earth and pounds the ground through the whistle; getting up and under bigger bodies, driving them deep into the second, and sometimes, third levels.

His lateral movement is advanced for a seventh-grader and he is able to pass-protect well; playing back over his heels and rear-end, and not over his toes, where length might overwhelm him. He plays in space, which takes a lot athleticism at his grade level and his stage of physical development.

In every thing we saw, Biever is an elite player for his positions and at his level of experience. He has upper-level skills, utilized in his play, evidencing he having been well coached.

Should he continue to work hard on the things he can control, like speed, explosion, strength, and power; ignoring what isn’t left to him (size), there is no reason he won’t develop into a Friday night star and a future Saturday player. Good news parents, we forecast you won’t be paying tuition either. Call it a hunch.