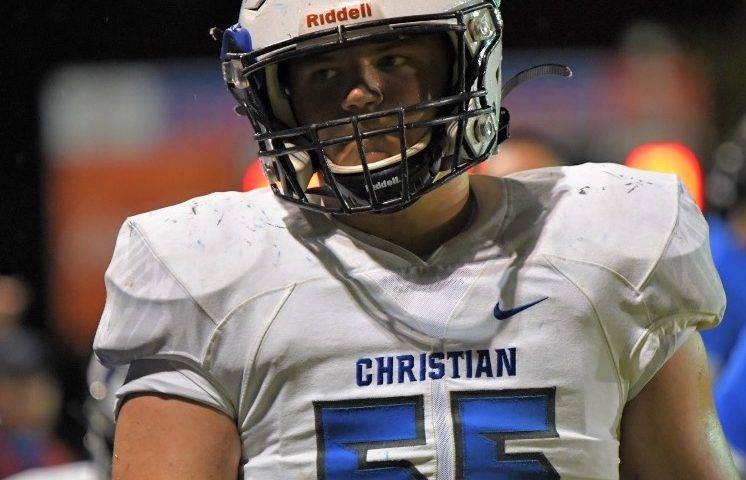 Around KPGFootball we used to call Anthony Johns “Big Bear.” We are very familiar with Johns having covered him since his “Team Kentucky” playing days back in middle school when he helped guide LCA’s middle school team to the KYMSFA State Championship.

His dad told us he didn’t like the nickname so we stopped calling him that. A man, no matter what age, has a right to be referenced how he chooses we figured.

Well, his dad says now that Anthony has rounded into one of the KHSAA’s brightest high school football “front-line stars,” and now that he calls himself “Beast,” Johns has given us permission to once again call him “Big Bear.” We are relieved (as we have been doing it around our office behind his back anyway).

Anthony Johns is just a big, agile, fast, powerful, explosive…bear (or beast) of a man, frankly. We saw quite a bit of film on him last year and were of the opinion, with no disrespect intended, he was LCA’s very best offensive lineman on a team which was arguably the classification’s best.

They played in Somerset’s district and beat the State Champions during the year by a single point and then lost in the District Championship round, 28-26. Two games and the two teams were separated by a single point. Somerset would argue both games were played in Lexington. Oh well, they did end up with the hardware.

Now, Anthony started at LCA as a freshman, night-one, snap-one. By this past season, Anthony (2022-prospect), “old No. 55,” was a fixture along the offensive front. This coming year, with the physical transformation he continues to undergo (See above picture), the only thing we can imagine is DE’s on that side will be looking to swap ends.

One of the true pleasures of coaching football (and covering it) is to watch kids develop from boys to grown men. Johns was a fantastic football player as a “boy,” making both our KPGFootball freshman and sophomore All-State teams. Johns grown into a man…well, he’s just blossomed into a seemingly, literal bear.

Anthony “Big Bear” Johns is now 6-3 and has packed 280-pounds of stone onto his once thin physique. Has it detrimentally impacted his speed? How does a 5.1-second, laser-timed, 40-yard dash sound to you? Know of any other HS O-linemen, weighing 280, who can clip-off a 40 that fast?

We talked to his dad, Jason, just last night and he guessed Johns will be closer to 285 after the food he put away at dinner last night. We here the boy can really eat. It about takes a federal or state grant just to feed him, or so his dad laments.

Now Johns has been stationed, since entering high school, at the offensive tackle spot. He has plenty of length to play there and his technique is fantastic as he has benefitted from outstanding coaching in high school, a credit to the LCA-staff.

At the next level, and we believe he will play as a FBS or even Power-5 prospect in college, we see him using his frame, athleticism, explosiveness, and speed to move inside to guard or center. If he can snap a football, he has the perfect frame, intelligence, demeanor, and athleticism to be one of America’s elite offensive centers in the 2022 class.

It has been our inestimable honor to cover the “Big Bear.” By the way Anthony, thanks for bringing back the nickname. It just fits.