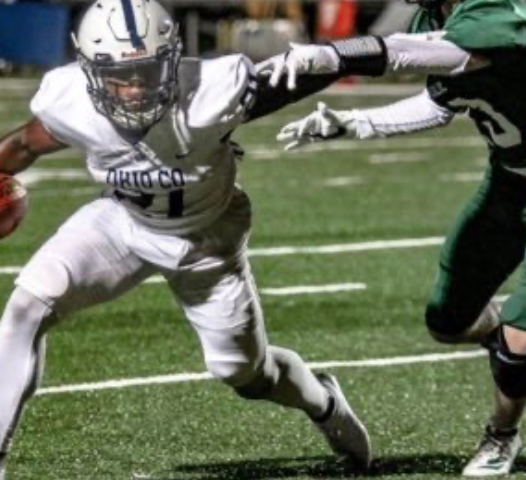 When you are Q, or basically the Kentucky High School football equivalent (in fame at least) of an Elvis or Cher, you become so well known the first name, or in his case the first letter of his first name, is all that is required. Q is physically a grown man who is one of the most versatile and explosive RBs on the western-end of the Commonwealth.

Think, LaVell Wright (North Hardin) without the enormous amount of publicity or fanfare LaVell has benefitted from having (and so richly earned with his hard work and efforts). Those two guys, LaVell and Q are similarly built, have similar attributes to their game-play, and are very similar backs. Both of them are spectacular, LaVell’s supporting cast is WAY better.

We first told you about Q in an article we published to this site in February of 2019. The article, linked here, was entitled Q’Daryius McHenry, They Call him Q, We Call Him Splendid.

Jennings is 5-11, weighs 200-pounds, and is a multi-faceted threat out of the backfield. In 2019, the junior had 163-rushing attempts for 1,026 yards gained from scrimmage with 11-rushing TDs. He caught 33-passes, swinging out of the backfield, for 331-yards receiving with 5-TD receptions. Q did all of this in 9-games of play.

Sure, there were RBs in Kentucky who appear to have gaudier statistics. Many of them played 13-15-games, not 9. If you extrapolate his production over 13-games, he would have gained 1,482-yards from scrimmage, had 16 (or so) rushing TDs, caught 48-passes, for 489-yards in receptions and 8 (or so) TD’s through the air.

What we are saying is, had he played as many games as the RBs against whom he gets regularly judged, he’s a 2,000 yard, all-purpose RB with 24-TDs. Statistically looking way better, huh?

The college recruiters see the same thing we do. He’s already been offered by Kentucky Wesleyan and is being courted by the likes of Austin Peay, Cincinnati, Arkansas Pine-Bluff, and Western Michigan among many others.

We don’t know exactly where Q will play in the Fall of 2020. He has moved around some over his tenure which isn’t his fault, at all.

Q‘s living arrangements are fluid, which is tough on him but something he has made the best of, like any good soldier. He has a relative in Owensboro and there have been rumblings linking him to one of the Owensboro-area teams, we will just have to see.

Of course, he may well be back at Ohio County. We just don’t know.

We know, where ever he is, we expect his senior-year production will be through the roof. Q makes any team which deploys him in its backfield, better for his being back there. He will go on and play college football at a very high level, as high as he wishes to play, we suspect.