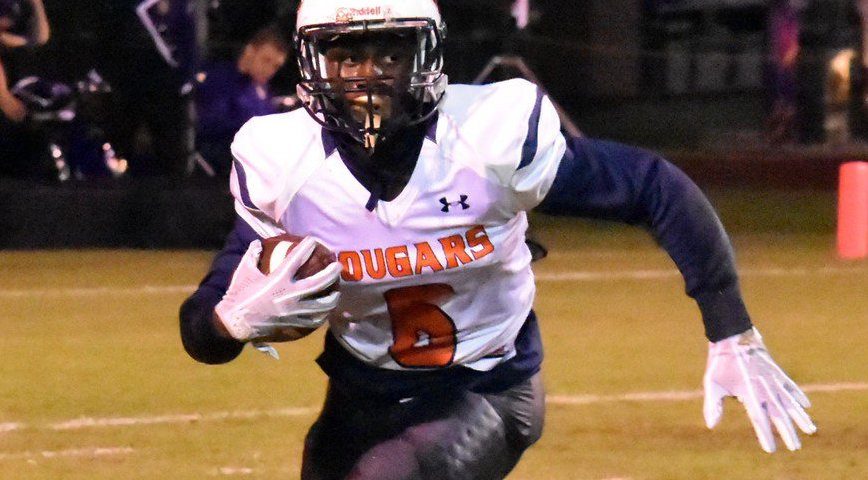 Who is that you say? Well, someone obviously doesn’t watch much basketball because the 5-11, 185-pound athlete is also considered by many among Kentucky’s top 2021 basketball prospects in addition to what he does on the gridiron.

What Q’Daryius McHenry meant to the Grayson County football fortunes in 2018 is the stuff of myth, the stuff of legend. McHenry played in only 10 of Grayson County’s 12 games, which certainly didn’t limit his on-field production.

McHenry lists on his Hudl-page playing RB, FS, SS, CB, SB, and WR. Judging by last year’s production, it is entirely possible he can play everyone of those positions. Hell, if he can strum a banjo I can get him a spot on the midway at the county fair!

We would imagine either he’s too busy offseason hooping to get around the camp/combine circuit or Leitchfield, Kentucky is doing a poor job of getting the word out on this guy. As for our sophomore All-State team, we just flat missed him…he should definitely be on there.

Q’Daryius McHenry is an excellent representative for the myriad prospects who “fly under the radar” around the commonwealth of Kentucky. If this kid were playing in a less remote region of the commonwealth, he would be on every ranking service’s top-prospect list. While KPGFootball seems late to the party, don’t forget we did beat every one of our competitors, which is why you subscribe to us in the first place.

Now, we have no idea how fast his 40-yard dash time is. We don’t know how fast he can run the pro-agility shuttle. We have never seen his “L-cone” time or either how high he vertically leaps or how far he broad-jumps. His Hudl highlights are chopped up into different game snippets as opposed to their having been conjoined into seasons. Basically, what we are saying is…this kid hasn’t been anywhere close to appropriately publicized and that is really sad.

For our part, we are going to do what we can to get the word out on this prospect. We hear his friends just call him “Q.” We don’t know whether we rank with Q’Daryius to the point we are entitled to refer to him so informally. What KPGFootball can say earnestly is this…He is certainly a splendid football player. He’s also one we will continue to monitor with a bent toward publicizing his accomplishments appropriately from this point forward.