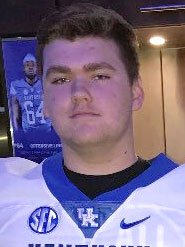 We have before written about Dane Jackson. We not only featured him previously but he was on our 2017 KPGFootball sophomore All-State Football team. Looking back on that team, and consulting the various ratings services, it doesn’t appear we were wrong about a single player on the 2017 sophomore squad. We certainly weren’t wrong about how terrific of an offensive center, interior offensive lineman, Dane Jackson both was and still is.

The 247Sports Composite, which (as recent events have demonstrated) is the most reliable and least likely to promote a “Catfish” among the services out there, has rated Dane Jackson a three-star prospect, 11th among the country’s offensive centers in the 2020 class, and the 12th overall prospect in Kentucky in the class of 2020. Jackson is already holding an offer from EKU with many others likely to get in the battle for the front-line mauler.

Dane is the little brother of the starting center at UK, Drake Jackson. Like Drake, Dane has the versatility and athleticism to play numerous positions long an offensive front. Basically, at guard, he’s kind of a Shaq Mason, and at center he’s kind of another, well…you know…Drake Jackson.

Dane fires off a line of scrimmage hard and low with excellent leg-kick and low pad-level. What probably stands out the most about this prospect, who was just voted the “Offensive Line MVP” at the “Best of the Midwest Combine” in Indianapolis, IN, is his exceptional balance. Dane uses the balance he has to get all his cleats in the ground, play over his strong core, and run his feet through the whistle gaining ground the whole time.

We have before said on KPGFootball that playing offensive line is technique. In fact, a phrase we coined ourselves is technique trumps physique when physique lacks technique. While Dane is mobile, strong (315-pound bench press), powerful (450-pound back squat), aggressive, explosive (265-pound power clean), and smart, one of the more pronounced attributes about Dane is he plays with excellent technique garnered from growing up in a football family. His father, Brian Jackson, played fullback at Purdue and his brother is the best center in the SEC, anchoring probably the conference’s best front.

When judging offensive linemen, particularly in high school, it is hard to gauge the level of play owing to there really being no recognized stats tied to the position’s play (according to the KHSAA) other that “starts.” Here’ s a telling stat, at least to KPGFootball: Madison Southern, though 2-9 in 2018, boasted the presence of a 1,000 yard rusher in the backfield (Tobias Storm); gained 2,561 yards from scrimmage in 11 games (233 yards per); and averaged 7.1 yards per rushing attempt while running the ball from scrimmage 361 times. Not too many 2-9 teams pounded the ground like that. There are championship teams in Kentucky who didn’t run the football any more effectively than that.

Obviously, the entire front line has to be credited with that kind of rushing output from a 2-9 team. However, the anchor and “de facto captain” of any offensive front is its center. I am willing to wager any coach on the Madison Southern staff would readily concede Madison Southern doen’t enjoy that level of rushing output in 2018 without an absolute stud, an absolute Dog, anchoring the middle of its OL.