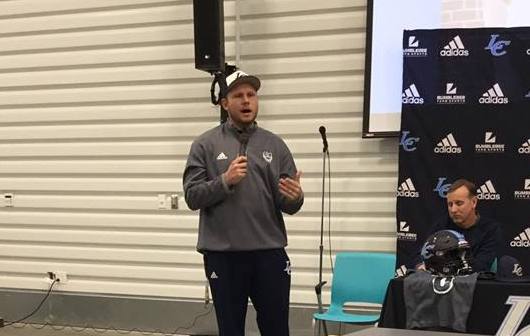 As soon as school reconvenes, the Logan County Cougars are going to open its Spring Practice. Logan County has been one of the bullies on the block in the past two seasons in western-KY football, particularly in the 4A classification. Over the past two seasons, the Cougars, once a door-mat, have risen to great heights, winning 21 of its past 24 football games.

So entering Spring ball, how do the Cougars appear? How will the Spring semester’s upcoming graduation effect the Cougars prospects next Fall? Who are some of the up and comers we may expect to contribute early? We will take a look at all of these questions and try to break it down for you in this article.

One of the most important positions on any offense is the quarter-back. The Cougars look solid there with the return of one of western-KY’s best athletes manning that position. Tyler Ezell is a winner and one-Hell of an athlete.

First of all, Tyler competed in the 39th annual Kentucky Powerlifting State Championships as an 185-pounder. Tyler finished third in the entire commonwealth with a combine lift of 515-pounds (bench + power-clean). You have got to be kidding me, the freaking QB finished 3rd in his weight-class in the entire commonwealth of Kentucky? I know, pretty amazing. His running-back, Gary Hardy, who also returns, finished third at 220-pounds with a combined lift of 565-pounds.

On the football field, Ezell was 107 for 186 through the air (completion percentage of .57526882), throwing 12 TD passes while being picked-off 8 times. Ezell was the team’s second leading rusher with 492 yards from scrimmage in 67 rushing attempts scoring 11 TDs over the ground. Hardy and Ezell, combined, scored 182 of the team’s 476 points on the season.

Gary Hardy, for his part, who’s back for one more tour of duty, gained 1,483 yards in 175 carries with 18 rushing TDs. He was 110 of the 182 points both Ezell and he scored for the Cougars. Gary Hardy is a man, pure and simply, and is the largest, most powerful, and explosive running-back on our end of Kentucky outside of Q (Q’Daryius McHenry, Grayson County).

As for passing targets, Ezell won’t have Dontavius Blann, Chandler Silvey, Koby Wall, and Reggie Powell to target in the passing-attack as they are all out of eligibility. However, leading receiver in 2018, Maurice Gordon, is a class of 2021er as is one of the more explosive and athletic down-field options in Anthony “Rooster” Woodard. KPGFootball predicts Gordon and Woodard will be either aligned wide or in the slot and both comprise down-the-field passing options in 2019 with whom Ezell is comfortable connecting already. For his part, Gordon caught 36-passes in 2018 for 495-yards with 4 TDs receiving while carrying the football 38 times for 313 yards with 3 rushing TDs out of the slot.

The offensive line will be somewhat of a question mark. The question won’t be the loss of too many upfront but the loss of Caden McKinnis. Many people around Kentucky think of the former-All-Stater as a defensive lineman, and when we detail his numbers from last year, you will see why. However, McKinnis was being recruited by teams in the Big-10 conference to play offensive guard at the next level and filling his shoes along the offensive front will not be an easy chore. What will make it even harder is the fact McKinnis was mainly deployed at offensive center, which explains why Ezell gained, and didn’t lose, so many rushing yards. There wasn’t any A-gap heat flushing him from his pocket.

Logan County has some good news for those whom might be nervous. KPGFootball believes both tackles coming up into the Class of 2023, All-Staters Keyton Jenkins and Isaac Poe, are the class of their graduating class along the offensive front. We don’t know if either will be aligned at tackle next year but we believe both will be strong candidates for early varsity playing time in spite of being rising frosh. Jenkins is 5-10 and weighs around 250-pounds with Poe being the lengthier of the two at 6-2, 260. If either one of them isn’t a go opening night up front it won’t be because they aren’t physically strong, quick, or explosive enough to do the job.

Until the young-guns are able to be plugged in and counted on, the Cougars do return Jerzy Jeziorkowski. Jeziorkowski is a 6-2, 280-pounder who is a two-way lineman for the Cougars and a load who moves surprising well for his size and Tomas Kash, Class of 2021, will also be on-hand to man the trenches. Kash is a 6-0, 260-pounder.

Both kickers will be back in Lucas Arevalo and Thomas Bilyeu. Aravalo was selected to our KPGFootball sophomore All-State team and is widely considered the best placekicker in the western end of Kentucky. There were no kickers in Kentucky last year, especially in western-Kentucky with any better or any more range than Lucas Arevalo. Arevalo was 39/47 on his PAT attempts for an 83% conversion rate. He was 7 for 9 on field goals, hitting multiple field goals from 40 or more yards including one he nailed from 51-yards. A 51-yard field goal means the ball was at the opponent’s 34 yard line! What would have been a punt for probably 99% of the team’s in Kentucky not inclined to attempt to convert it on 4th-down, for Logan County was a scoring opportunity realized.

Defensively, the losses appear more pronounced and significant than the losses on offense everywhere but along the offensive line. Caden McKinnis all be playing Division-I, college football in 2019 and his 91 tackles, 18 tackles for loss, and 7 QB-sacks coming straight up the offense’s pee-hole will be missed. McKinnis forced a couple of fumbles, in addition to everything else, and recovered one of them.

Now, that is the bad news. The good news is two-time KPGFootball All-State LB, Zack Yates (No. 15 above; Photo: Kelley Phillips) returns. A quick look at Zach’s stats and on-field production quickly underscores the point he is, indeed, a football player.

After a stellar freshman campaign, where we selected him All-State the first time, Zach had another All-State year as a sophomore. Zach tallied 89 total tackles, 11 TFLs (tackles for loss), 3 QB sacks, forced 2 fumbles, recovered 3 fumbles, and even collected a pair of interceptions together with 45-return yards, scoring one defensive TD.

In limited time in the offensive backfield, he also gained some yards rushing from scrimmage, though Zach is mostly deployed at LB. Ask any coach on the schedule and he will tell you the kid which likely beat his team was the thick, short kid at LB running around making plays all over the football field. Zach Yates is a winner, and he makes kids around him winners. His attitude and penchant for coming up big in big situations, rubs off on the players around him. Can’t really over-state what his returning means to the defense in 2019.

Returning along with Yates are Tristan Blake (3 interceptions) and Anthony Woodard (2-interceptions). If the Cougars can get a consistent rush from its defensive down-linemen with both Caden McKinnis and Damon Stephens departed, they will be tough in both the 2nd and 3rd levels defensively.

In the offseason, Craig Bristow was added to the variety coaching staff after having headed up the middle school team over a very successful run. No one over the past three years is a hotter coaching commodity than Todd Adler who has turned around and resuscitated a program many had left for dead. The schedule will be challenging in 2019 with just the addition of defending, Class 5A, football champion South Warren. This is a very well coached football team and it not continuing its present level of success will not be attributable to anything they either do or don’t do.

As Logan County enters Spring, we believe there are significant pieces remaining for the Cougars to be quite good on offense. There are questions up front on both sides of the ball but quite a few really good players remain from off a roster which has won 21 of its previous 24 football games. How do the Cougars replace a once in a program’s history level of player like Caden McKinnis will be a huge question. McKinnis not only played to an unbelievably high level but raised the level of the play around him owing to the attention he naturally garnered from opposing game-plans. We believe Logan County is a threat to win Class 4A, district 1, along with Madisonville North-Hopkins, and should they fall short of that, we can’t see them finishing worse than 2nd. They have beaten Hopkinsville two of the past three and they will be better than the Tigers in 2019.