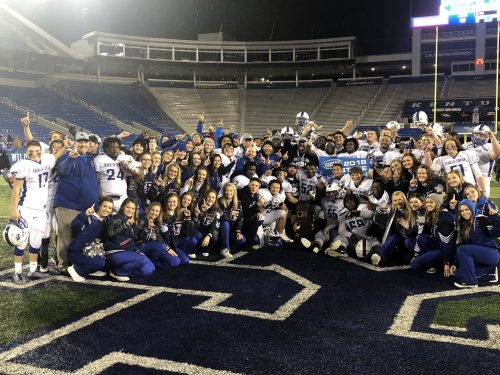 You have often heard us say that a high school football star, and future college football player, needs to make his way onto the field sometime during his sophomore season. Too many times we get asked by college recruiters about players who don’t see the field until they are juniors. “Why did it take him so long to see the field?” We’ve heard it so frequently we could just write the query for them.

Not all programs are as dispensing with playing time to young players as others. It can be pretty common for programs the ilk of Saint X, Trinity, Male, etc. to have kids who can’t get any PT until they are juniors. There is a lot of talent at schools like that, parents of those kids argue. There sure is, but KPGFootball still gets asked nevertheless.

A kid who got quite a bit of PT in Class 4A’s premier program was Class of 2021, sophomore, Malik Carter. Franklin-Simpson, in addition to having played for three straight Class 4A football championships, winning the last two consecutively (2017 & 2018), also doesn’t make a complete posting of its defensive statistics on the KHSAA website. As a result, there are things about Carter’s defensive performance we just don’t know. We will focus on what we do know.

We know Carter was a fixture in the backfield, in the Wing-T offense run by Franklin-Simpson, at the FB slot. We know he gained 197 yards in 33 carries in 12 games of action there in 2018. We know that, during the Semi-final game with Taylor County, in Campbellsville, KY, Carter carried it across the goal-line twice to help lead his team to a 33-0 win.

Now, Carter’s defensive performance is largely an unknown. We know he was deployed at LB for much of the time. We know he registered 2 QB sacks during that deployment.

Now we are going to make some educated guesses. It would appear to KPGFootball that Malik Carter, whose Hudl highlights are fairly sparse, is put together like a classic high school LB/FB type. He’s listed at 5-8 and weighs in the neighborhood of 190 pounds.

Carter, most certainly, has to be well-muscled up and explosive, with plenty of quick-twitch, to play in 12 games at two such prominent and important positions for Kentucky’s premier Class 4A football program. It also appears, to KPGFootball, Carter’s catching meaningful action on both sides of the football means he is considered among the best sophomore football players on the Wildcat roster.

From all of the above, and with losing much of its over 5,000 yards rushing from scrimmage on the 2018 season to graduation, KPGFootball looks for Malik Carter to play a much more expansive roll on next year’s team. We believe Malik Carter will round into a star in Kentucky High School football either offensively, defensively, or both.

KPGFootball believes, though many in Kentucky may not have noticed it, that a “Star” was born within the Wildcat lineup along the road to the 2018 State Football Championship. We are confident the “Star” will continue to shine, much as it did in 2018, just much, much brighter in 2019 and 2020. Finally, we believe Kentucky high school football fans would do well to remember the name “Malik Carter.”

That’s what we think at KPGFootball. We only cover high school football in Kentucky year-round, 24/7, 365 days a year. What the “Heck” do we know?