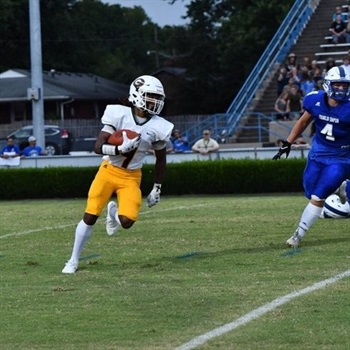 No one can say the Greenwood Gators didn’t take a tremendous forward bound in 2019. I am sure second-year head man, William Howard, would tell you not all 5-6s are similarly constituted.

That is especially true when you take over a program left by Chris Seabolt, who went 4-8 in 2017, and your first year out of the gate you slip to 2-9. They didn’t like Seabolt’s offense and the disproportionate way it leaned on ground-production.

Well, the Gators have thrown it both more often and more efficiently under Coach Head. In 2019, we started to see the fruits from Head’s commitment to offensive balance get harvested, especially in the first half of the season.

Greenwood literally shocked the world when it opened with a two-touchdown victory in Franklin, Kentucky against a Class 4A Wildcat squad coming off back-to-back football State Championships. That term is overused but it applied the evening of August 23, 2019 in Franklin, Kentucky and through the commonwealth, let me assure you.

In fact, when Howard had the Gators 4-0 there were those around the media starting to inscribe his name on the coming AP Kentucky High School Coach of the Year plaque. Then the Gators hit Russellville, Kentucky at the Logan County Cougars, got drilled 43-6, and the bottom fell out from there.

The Gators won exactly one of its final seven-football games. It was an uninspired and unimpressive road win in Hopkinsville against a hapless and winless Christian County team by 6-points.

Before we are too critical, such is the life when you are in a four-team district in the 5A-classification shared with South Warren, Bowling Green, and Christian County. After all, all three of those teams have won it all numerous times.

Truth be told, until the Colonels restock the cupboard, which let me assure you will happen, Christian County and Greenwood will be locked in a death struggle, each season, to determine which of them gets to get blown out, week-one of the playoffs and where. The only variation will be which teams travels to BGHS and which to South Warren to get this beat-down administered.

Now in 2020, Greenwood lost a lot when the Gators’ Reed Slone ran out of eligibility. After all, Slone led the team in rushing, rushing TDs, receptions, TDs receiving, and scoring all while contributing big plays (and scores) in the punt/kick return game.

Odom had 139-carries for 711-yards rushing with 5 TDs in 2019 to go along with his 20-receptions for 206-yards thought the air. He was also second on the team in scoring behind a guy who is no longer there.

Yessir, Odom has to pick it up to replace Slone’s production for the Gators to climb into District-2 contention for a home playoff birth. He has the ability and the skill-set to come to the rescue. Now in 2020, he will have less populated backfield of rivals with whom to share the load.

Opportunity is a-knocking, young Mr. Odom. It is time for you to answer the door.