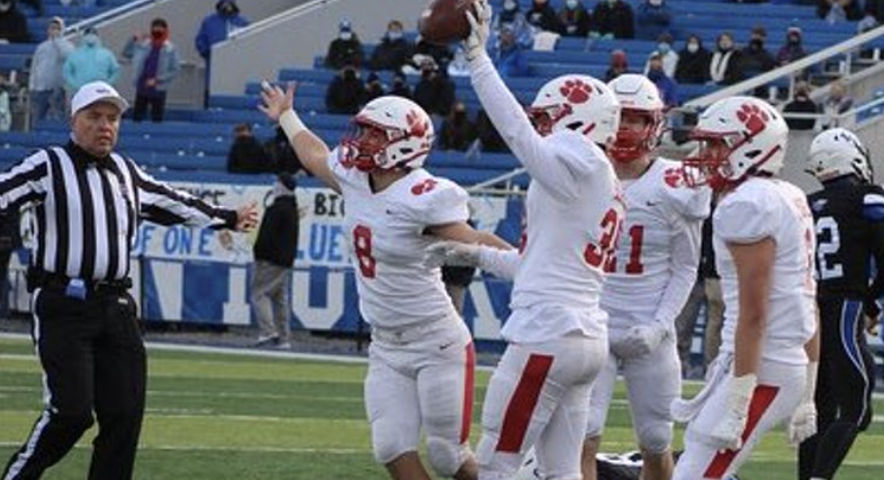 Mitchell Berger is proof there are more horses in Beechwood’s stable than just the reigning ‘Mr. Football.’

How many of you out there are sick and tired of hearing Beechwood has a one-man team? The first person who would dispute that notion, and who is probably just as tired of hearing it as any of you, is Beechwood’s reigning “Mr. Football” and scintillating, dual-threat QB, Cameron Hergott. Lots of other northern Kentuckians would dispute it too, but the way.

All of that being said, and we might as well get this out of the way too, Hergott has had another “Mr. Football” worthy effort this year. Still, no man is an island unto himself (John Donne), and Hergott isn’t either.

Ask Mayfield. They will tell you about some of the other guys who had Beechwood “running the clock” on them in the State Semis just a few days ago.

One of the more overlooked players in Kentucky is its Class of ’23 prospects has been Mitchell Berger. Berger is 5-11 and weighs in the vicinity of 200-pounds. Every pound and inch of him is “football player.”

Berger is being recruited heavily by EKU, Youngstown State, and a host of other heavyweight, FCS-level programs. Where he will eventually land is anyone’s guess.

Beechwood has built it program on the backs of football players the likes of Mitchell Berger. Guys like that have carried the program to 15-titles.

Berger really showed something to that bunch from Mayfield. Berger rushed for 189-yards on 18-carries and scored two (2) of the team’s four (4)-rushing TDs. Berger’s partner, Hergott, contributed 19-carries, 128-yards rushing, and scored the other two (2) TDs on the ground.

Berger recovered a fumble. Yes sir, he plays defense too.

Matter of fact, Berger was selected among the 10-best LBers in the Greater Cincinnati area. Berger is also among Northern Kentucky’s leaders in both receptions and TD-receptions for his work at WR.

In our opinion, he belongs on the All-State football team. Probably as an “athlete” as his contributions are myriad and come from all phases of football.

Berger has done it all year. He has gained 448-yards rushing in only 55-carries with 9-rushing TDs. He has caught 26-passes for 545-yards receiving with 7-TDs plucked from the air. He is among the leaders in several statistical categories on defense like tackles, FRs, TFLs, and QB-sacks.

Mitchell Berger is a football player. He’s a “Jack of all Trades,” mastering more than his share.

Most importantly, he is tangible proof that Beechwood, Northern Kentucky’s small-school juggernaut, runs way more than a one-horse race.