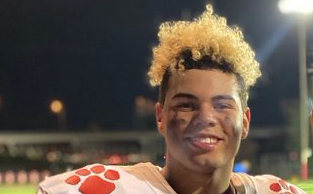 Sometimes it seems odd to call a particular player a “break-out” player. Generally, we have described this as an “under the radar” guy who will just explode suddenly on the scene in the coming season.

Some of these young guys we’re calling “break-outs” are really already big-time players and arguably stars on the current roster. Today’s feature would be an example.

People around Northern Kentucky would tell us, “How are you going to call Xavier Campbell a ‘break-out’ player? He made the NKY 1st-Team in ’20, he was Honorably Mentioned on the all-Tri-State team, and he was second on a championship-level defense in QB-sacks, all while a sophomore. How has he not already broken out?” Okay, you have a valid point.

Believe it or not, we think you haven’t seen the tip of his iceberg. Consider the fact the 6-0, 225-pounder, while just a sophomore, has already registered a 4.8- second forty-yard-dash-time. You have to figure he will get both taller and longer. He’s has good speed and bend now, can you even imagine what a couple more years of development, a couple more inches of length, and a couple more years of off-season, athletic training will do for him?

He’s awfully twitchy right now. We love his power and athleticism and his ability to dip, stay low, and bend around the tackle when rushing upfield. He’s got fantastic explosion and closing speed too.

On his film we saw him make plays in the backfield, we also saw him chase plays down the line and into the boundary, and we saw him close on plays from behind in an instant. He appears to have all the tools and this was watching his sophomore film.

If this prospect can get his 40-yard dash in the 4.6-low 4.7’s on the laser and stay as limber and athletic as he is while growing another two to three inches and adding 20-pounds, we think this guy is a sure-fire, FBS-take. Where he is right now, he’s a college football player. Not only that, he’s the kind a college football program will spend real money to get.

Yessir, this guy has played well to date, no denying it. However, even with this current star, what lies ahead for him beginning next season will boggle the mind. That’s why he’s on our “break-out” list, because with apologies to BTO (Bachman–Turner Overdrive), “[y]ou ain’t seen nothing yet…”