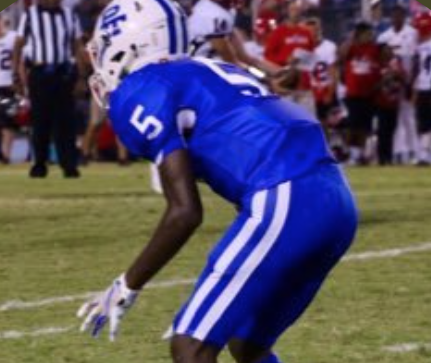 Paducah’s Blue Tornado! Now, that is a team and program westerners have loathed seeing pop-up on the forthcoming season’s schedule most Falls. If there is one boast towns like Paducah, Hopkinsville, and Owensboro will always be able to make; it is having extraordinary athletes dotting the roster every year.

Thomas is a class of 2021 prospect who is 6-1 and weighs in the neighborhood of 160-pounds. He is a pogo-stick, with oodles of vertical explosion, filthy fast, and too quick to corral in a phone booth.

He is a guy The Blue Tornado will have to call-on, and on both sides of the ball, if they are to continue the program’s return to prominence. Make no mistake about it, Paducah Tilghman is begging to frighten folks once more.

Paducah was 9-4 a year ago. They got to host the Regional Championship (where they were upset by Taylor County), and spent the entire season in the AP’s weekly top-10 poll. The Blue Tornado garnered “number-1” votes several of those weeks.

They will be missing some huge weapons in 2020. For one, Damien Ford, an all-state caliber guy and newly minted college player, will be missed. Ford gained 1,686-yards, in 2019, and scored 21-rushing TDs. Jayden Freeman, another all-state caliber player, and another player headed to play on Saturdays, is out of high school eligibility clock as they say.

That will leave leading passer, Camdon Marshall returning. He will need some help.

In steps the possibility represented by Brain Thomas. Thomas has already been a stalwart on the other side of the football.

Thomas, in 2019, from his DB post, had 47-tackles, 1TFL, and 1QB-sack. He was among the leaders in passes-defended and was an active guy among the third-level disrupters stationed in the defense attempting to contain the Reece Jesse, Jr. (Hoptown) and L’Ray Coleman (Christian County) types we see running around fields in the western-end yearly.

Defensively, we need to see Thomas playing down-hill more and getting more involved in the run-defense as a senior. He has the frame, size, length, and “dawg” to do that. Offensively, he needs more targets, he needs more carries, he needs opportunity.

Regardless, this is a guy we expect to take a significant step forward this coming season. If he does, look for The Blue Tornado to continue to rule its district, though Trigg County will have plenty to say about that in 2020. If he doesn’t, it may be The Year of the Wildcat in District 1 with Head Coach Mark Peach in the saddle and Rusty Goble back to run the Trigg County passing game.