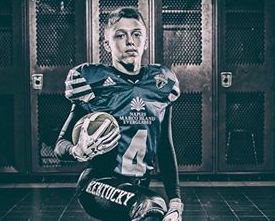 Ethan Gregory is a firmer member of the Team Kentucky FBU elite squad. But for Illness, he may have been a three-timer. He has combined with FBU in Atlanta, Indianapolis, and was selected for the very prestigious “Top Gun” combine annually held in Rock Hill, South Carolina.

He has been laser-timed in the 40-yard dash at 5.07-seconds by Zybek Sports. Let us put that in some perspective.

According to Zybek, who incidentally runs the testing at the NFL-combine, a RB in the same graduating class as Ethan, to be among the country’s top-20 percent from the 30,000 players it has tested nationally, needs to run the 40-yard sprint in 5.765-seconds or faster.

Again, this is a laser-timed 40-yard dash. Gregory ran it in 5.07-seconds, laser-timed ( and yes, it was worth mentioning a third time).

Ethan is 5-8 and weighs 155-pounds of grit, toughness, and muscle. Gregory is already preparing himself for the rigors of varsity football and has his bench press up to 185-pounds with a back squat of 250-pounds.

His pro-agility shuttle is already under 5 (4.929, laser-timed). He has a 27-inch, standing vertical with a broad jump over 90-inches.

In sum and substance concerning his MS football playing career, Gregory went out on a high note. Gregory was credited with 13-tackles, playing for Whitley County in the second round of the KYMSFA, Divison-1, playoffs.

While Whitley County lost, they lost to a very good North Laurel squad who was eventually crowned the Division-1, KYMSFA State-Champion. So where is this young phenom and top-three rated RB in the 2024-class, Kentucky-wide, headed to play football?

We were able to reach his father, Michael Gregory, and he told us the following…”Ethan is weighing his current options as to where he will enroll as a freshman. His mother and I intend to let him make his own decision and support him in wherever he should choose. We are considering Whitley, Corbin, or Boyle County.”

Wherever he should enroll, one thing is certain, keeping him eligible shouldn’t be an issued for this 4.0 GPA student. If you are looking for play-alike comparison, in watching his film, he looks very similar to another Ethan from the area who tore it up in middle school and has done the same in high school.

Ethan Gregory embodies many of the same attributes as Ethan Mills (2021). Both are barrel-racing, quarter horse, type running backs with excellent explosion, vision, separation speed, and burst through the first level. Both are good students and freakishly athletic.

We had a chance to talk about Ethan Gregory with Ethan Mills’ dad, Larry, just last night. Larry shared with us this isn’t the first time he has heard the two Ethan’s compared.

Larry Mills and I both agree running-backs, the good-ones, are born and not “created.” In my humble opinion, the really good-ones break immediately into the second level and then exercise one of only three options, left, right, or right over top of the defender.

I have heard it said that most traffic accidents occur when a motorist breaks into the collision. The same is true of football.

When you are a running-back, you break into getting tackled most of the time. Don’t slow down, apply the gas.

The good-ones don’t have to be taught this. They do it instinctively.

Gregory is a guy with excellent pad-level, quick-twitch explosion, cutting on a dime ability, and excellent vision to feel or sense the cutback lane. We know we will be monitoring him closely for our end-season Freshman All-State football team. We recommend you watch him closely too.