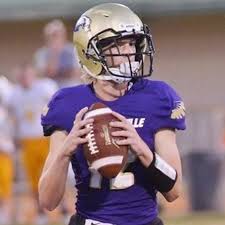 He’s been one of our favorite players in the 2021 class since he was in middle school. We dubbed him “The Rifleman” in the first article we published about him.

That article was published over three year ago, April 1, 2017 to be exact. In that article, we said the following…

“In the mode of a pure, drop back, pocket passer, Campbellsville, Kentucky’s Arren Hash is sporting a rifle hanging from his right shoulder…Arren has just enough mobility to avoid pressure but really isn’t the type of QB who thrives in an offense looking to make a living off his wheels…”

“In short, Arren is just for what one is looking at the position in that he is tall enough to see over the line of scrimmage, has really good foot work, stands tall, and delivers the ball either on a line or with a little loft, where the situation would dictate and has the intelligence to manage the game, like having a Coach on the field…”

Now, three years later, that forecast has born largely true we would contend. In three years under center, “the Rifleman” has completed 53% percent of his passes (379 for 702) for 6,135-passing yards, with 71-career TDs. He has been intercepted 34 times with half of those coming over the course of his freshman season. He has also won 24 of the 38-games he has started in his three years under center, which is a winning percentage of 58%.

Coming into his senior year, the three sport athlete at Campbellsville High School has committed to play Division-1, college baseball for Bellarmine College.

He’s a D-1 caliber, college athlete, enough said. We could have called that three years ago. Sure we thought his college sport would be football but semantics at this point. He will get a top-flight, college education and the college will be paying for it. Declare him “the winner!”

We here at the magazine couldn’t be prouder of Arren Hash. For one, he fulfilled every promise we forecast he could possibly fulfill over three years ago.

He has been everything we thought he would be. He has been a fantastic QB. He has led his team to a very fine record and deep into the playoffs all with him under center and directing the attack. He is still today, baseball or no baseball, one of Kentucky’s finest QBs in the 2021 graduating class.

He has done everything the right way. He has comported himself with enormous class. We couldn’t be any prouder!