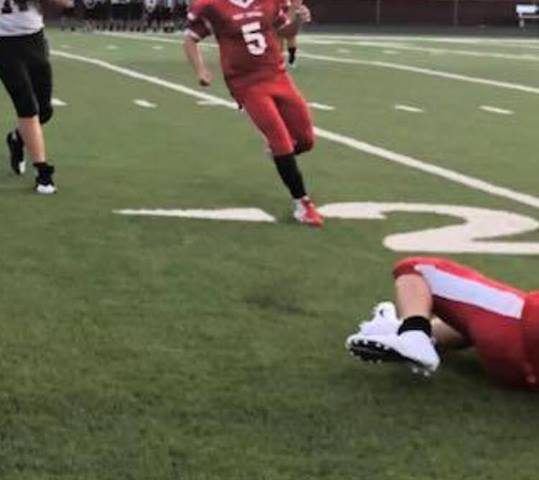 Now, this is the first time we have done a middle school, All-State, Football team, but it isn’t our first All-State Football team. For those of you who subscribe and belong to KPGFootball, you know we have before published both a Freshman and Sophomore All-State football team for the high-schoolers. In addition to that, KPGFootball is a member of the Associated Press and, therefore, votes on the AP’s Kentucky High School All-State Football team. We either know what we are doing or think we know what we are doing. As is our common practice, we will now go through the players selected and defend each player’s selection to this team. We, metaphorically, won the coin toss and elected to defer our choice to the second half, so we will begin on defense. We defended our defensive, first and second levels last week, so today, we will defend the selection of our defense’s back line of defense…the defensive backs. These were the KPGFootball, Middle School All-State DBs… 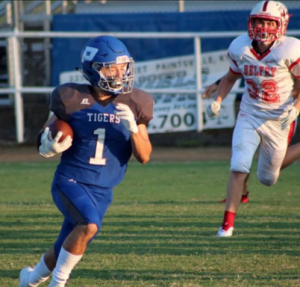 There has never, in the history of All-State team selection, been a selection any more mis-interpreted than our picking Harris Phelps to this team as a defensive back (strong safety) and not as a running back. We ranked Phelps in our top prospects list of 2023 Kentucky players. Among other things, this is what we had to say about him then…Harris Phelps is a RB/DB who is a 2-time member of Team Kentucky’s FBU National Tournament team. His oldest brother Kent Phelps, is presently a running back on one of the most storied and successful programs in the FCS, Wofford College. Another older brother, John Phelps, presently plays at Paintsville High School…Brother John averaged 7.345 yards an attempt running the ball for Paintsville’s 11-2, 2017 team while only a sophomore. To say football is in the genes around the Phelps household seems rather obvious. Our people in Paintsville tell us Harris Phelps may be the best of the three, and that is really saying a mouth full.

Harris, we are told, scored 32 TDs this year as an eighth grade running back and someone on the internet intimated we put him at defensive back because we didn’t consider him a first team running back. Au contraire…A member of our selection committee was from Paintsville, Kentucky. His comment was the following…You ask any middle school coach on Paintsville’s schedule and they will tell you, to a man, that the Phelps kid is the very best safety in Kentucky playing middle school football. He was the single most devastating weapon on the Paintsville’s defense this year. This is why we selected him where we did, and not some perceived slight against his ability to run a football.

Gayhart was limited this season due to injury. However, we had an All-State Mountain Combine this summer in Pikeville, Kentucky on the campus of Pikeville High School and the whole purpose of it was to identify and annotate All-State caliber players. We advertised it and it was well attended. If you live in the mountains and missed it, pay more attention to what we post, it just might be important. Anyway, Gayhart, at our Mountain, All-State combine, ran the 40 yard dash in 4.92 seconds. At 5-8 and weighing 135 pounds, that is moving what amounts to pretty short, stout legs very quickly. I would say the average 40 time for a star, first-team, defensive–back, who, like Harris Phelps, plays running back on offense, entering the 8th grade is between 5.2 and 5.6 seconds. I told you that for you to fully appreciate the significance of a defensive back already running a sub-5 flat forty. It is significant.

One of the combine tests which gauges athleticism, coordination, and spacial quickness/change of direction speed is what we call the pro-agility shuttle (5-10-5). An eighth grader completing this below 5.5 seconds is considered agile as a cat. You can imagine the buzz which went through the combine when it was announced Gayhart had completed the same in 4.58 seconds. I have before said, in writing about other middle school prospects, that an L-cone drill completed in under 9 seconds for a middle school athlete is a sign of upper-level coordination and change of direction speed and quickness. Gayhart’s L-cone task was completed in 6.9 seconds.

What is the sum-total of Gayhart‘s performance on these tasks? The sum total indicates Elijah Gayhart could start at many high schools, right now, playing corner. It means he is a physical mis-match for players at his grade level. It means he is a candidate for inclusion on any Team Kentucky for which he auditions and firmly on our Middle School, All-State Football team. I almost forgot to mention, he also repped the middle school, bench press rep weight of 115 pounds, 9 times (approximate, one-rep, bench press of 150 pounds). Ten reps at that weight is the level at which middle school coaches start promoting their linemen as having elite strength. This guy is a corner with whom to reckon, we reckon.

How in the world do you fit a football over the height and length of a 6-3 inch safety in middle school football when throwing the football down the seam? The answer is you can’t, so you don’t even attempt it. Not many people know about the incredible run of success at Owensboro Jr. High School or its incredible amount of talent it has dotting its roster on a yearly basis. Ethan is a kid with FBS, Power 5 level frame and athleticism, at this particular point of his physical development. Frankly, Ethan is the type of 8th grader who might be presently offered if he participated on the combine/camp circuit with regularity.

Ethan has been selected a Bret Cooper Junior (Middle School) All-American football player slated to compete for the East All-American team this December. Ethan was called by Coach Greg Brown the best football player on our team. Remember, we’re talking about an Owensboro Junior High’s team which has won 45 of its previous 46 football games, over a four year period, with wins, in going 8-0 this year, against College View, Bowling Green, and North Pulaski. Not every team in Kentucky competes for the KYMSFA State Chamapionship in football which is both regrettable and something we wish were different. However, in the opinion of KPGFootball, there isn’t a middle school team in Kentucky which can beat Owensboro Junior High School, whether they won a KYMSFA Championship this year or not. That has been true for the last 4 or five years, if we are being completely honest.

The Houston Astros have a second baseman who is among the shortest baseball players in professional baseball. His name, José Altuve. José who is generously listed as standing five-feet, six inches tall has been described by words attributed to a source, unimportant for our purposes, as playing with the tenacity and ferociousness of an eight-foot giant. Immediately upon hearing that description, we thought of Hopkinsville Middle School’s corner, Trushaun Matt (“Tru”). I will never forget the selection committee meeting where he came up for discussion. The first thing out of the mouth of one of the coaches was he’s kind of short, isn’t he? Tru, pictured in between All-Staters, Jacob Bealle and DaisJaun Mercer (Bealle is 5-11), is short. Now, he may be a late developer who may hit a growth spurt and be six foot tall before he enrolls in 9th grade, but we grant, he is presently the shortest superstar football player in Kentucky at his grade level. Of course, absolutely none of that has anything at all to do with his play.

QBs picked on Tru all year long, throwing to his side thinking it a mis-match owing to his height, only to get burned time after time. KPGFootball personally watched Matt play five times this past season and he was a personal no fly zone in the Tiger defensive backfield and the surest and most devastating open-field tackler on the Tiger defense. Consider this too in your analysis, HMS played All-State QB Joshuah Keith at CCMS twice and played TK Stone in the Regional Semis, a team known for throwing the football. Probably the best anecdote about Matt is the following…While at the second HMS-CCMS football game, which was the last regular season game for both schools, CCMS had a running back running down the sideline right at Christian County High School’s head football coach, Steve Lovelace. Tru came up and smacked the running back so hard Coach Lovelace grimaced like just having witnessed a devastating clothes-line tackle (though the tackle was completely legal). The collision sounded similar to a car wreck. Lovelace looks up and says Man, I would like to have that guy right there; he’s a killer.

On a football field with four other all-state football players playing at the same time, the play of the smallest kid on the field was demonstrably standing out to a high school head coach who has won well over 100 games in 12 or 13 years (unsure of exact number) and who has taken his team to the State High School Championship Game twice.  The truth about Tru is he played like that all year long.

In the end we decided it would be equally wrong to keep a kid off the middle school All-State football team, purely owing to his being undersized, just as it would be wrong to put a kid on the team who played poorly but who passed the eye test. Trushaun Matt, all year long, played with the tenacity and ferociousness of an eight-foot giant and THAT IS WHY HE’S ON THIS TEAM!

Well folks, there it is. For the reasons above we believed these four players to be very deserving of this recognition. I am sure these may not be the best four defensive backs in middle school football from across Kentucky but we are equally sure they are among them. All of these players have distinguished themselves both on the field of play and in the class room. Join us tomorrow as we commence defending the selections of our offense, beginning with the Hogs!