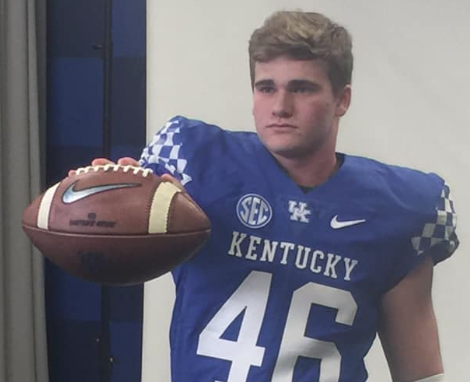 Will Darragh, whom some of you may recall made the KPGFootball All-State Freshman Football Team, for reasons set out in a previous article of ours which has been linked for you, was invited to take in the University of Kentucky’s football program. Darragh has been featured in this on-line magazine numerous times and has made quite a name for himself in Kentucky prep football circles.

Darragh, from photographs of him we have had provided us from his father, looks to be really filling out and taking to the offseason “Strength & Conditioning” program at South Oldham. Will is a prospect on whom we have been quite “high” as not only have we selected him to our Kentucky Freshman All-State Football team, but we also listed him as one of our top 17 football players in the Class of 2022. He came in at number 9 on that list entering the 2018 campaign. We are expecting he will fare better when that class is re-evaluated prior to 2019.

We get a lot of questions from parents, coaches, and the like about how we pick one player over another. We can’t stress this enough…we pick football players and leave prospect lists to the ranking services. We aren’t blind, however; and a young man who gets in the weight room and works on their appearance, strength, power, explosion, quickness, and speed will always impress KPGFootball. The reason…because gains made in the weight room are EARNED and not just given a player.

The Almighty decides how tall we are and what we will weigh, to a large extent, (pun intended). Sure, KPGFootball is aware one may glutton oneself into an unhealthy weight or starve oneself into an equally unhealthy weight but, for the most part, God makes us how He makes us. However, one doesn’t “look” like Will Darragh looks “as just a freshman” without earning it. No one gave that to him, he had to work very hard for it.

KPGFootball is the ultimate meritocracy, which is why we recognize underclassmen and not just the seniors. Shouldn’t it be the players who work hard whom benefit most richly from the publicity and notoriety our publication lends, we reason?

Why is Will Darragh an All-State Football player and making visits to UK in the spring semester of his freshman year in HS. Hell, look at him!