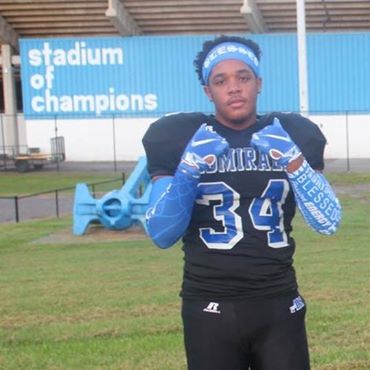 We have written about Danville, Kentucky’s Darrian Maurice Bell numerous times on KPGFootball. We were big fans back when he was a 6-0, 200 pound sophomore LB recording 144 tackles, 92 solos, recovering 3 fumbles, and picking two passes as a member of an Admiral team which went 15-0 and won the Class 2A State Football Championship (2017).

Well, the Admirals slipped a few ranks in 2018. KPGFootball predicted Danville High School wouldn’t be the same team without 2017 super-star, Dmauriae VanCleave; and, frankly, we caught a ton of pre-season guff about our prediction from the we only lost 8 seniors from off a 15-0, State Championship team crowd. Danville slid to 5-7 in 2018, still managing to get to the second round of the KHSAA playoffs before bowing out to Somerset 27-14.

A player whose performance stayed at an All-State caliber level was Class of 2020 Darrian Bell. What actually improved over the 2017 season was Bell’s frame. Bell, though a junior in 2018 and senior to be in 2019, is still just 16-years old. In spite of his young age for his graduating class, Bell’s frame has lengthened to 6-2, from his previous 6-0, and he has gained up to 210 pounds.

This puts Bell’s frame right on the money of where colleges want their linebackers to be, size-wise. According to Bell’s NCSA’s Recruiting Profile, Bell is bench pressing 260 pounds and squatting 405 pounds (4 plates) which, for a 16 year old particularly, is well above average strength and power, even for high-level football players.

Playing with much less talent around him in 2018, Bell still contributed 104 tackles over his Junior campaign, in only 12 games (as opposed to the 15 games over which he accumulated his 144 tackles in 2017), with 3 TFLs, a forced fumble, two fumble recoveries, and a half-sack he split with teammate Seth Gosser. Bell added some impressive offensive production to his repertoire in 2018, catching 9 passes, from TE, for 168 receiving yards.

Darrian Bell is a kid whom has flown under the radar somewhat, particularly with his on-field production and ideal frame taken into consideration. However, Bell hasn’t been devalued by this publication as he was selected one of KPGFootball’s Top-30 (No. 26) football prospects in Kentucky’s 2020 graduating class.

Off the field, as we have before noted, Darrian Bell is everything any college would want. He is smart (KHSAA Academic All-State, 4.3 GPA, 21 ACT). He is strong (winner of the Iron AD Award, and member of the 800 pound club (bench, squat, and power clean). He is athletic (plays basketball and football). He’s even a bit eclectic (on Danville High School‘s Bass Fishing Team).

Bell will continue the work he began during the offseason, leading into 2018, by continuing to increase his flexibility and gains in both vertical explosion and speed. We saw a more explosive, quick, and faster version of Bell in 2018, than we did in 2017, and there is no reason to expect those improvements won’t continue into the 2019 season.

Here is a prediction which comes under the category of Too Easy. Upon Bell’s graduation in 2020, we will see Darrian on a college game-day roster, with his school being paid for by the institution lucky enough to sign him. That, after all, is what naturally happens for high school football players possessing both the frame colleges want and delivering the performance colleges need.