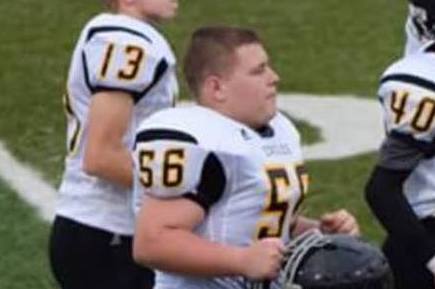 Cameron Willis is a name with which many of you who read this site are probably already familiar. Why wouldn’t you be? He was a very well decorated member of “Team Kentucky” in middle school, was selected to the Freshman All-State team at OG in 2017 and won the 240-pound, State Wrestling Championship, though only weighing around 205 pounds.

Cameron Willis is mean, he’s tough, he’s skilled, and he’s all Eagle. Johnson Central is among the most storied and accomplished football programs in all of Kentucky’s 4A classification, making annual runs to Lexington, Kentucky to play for it all. Why are the Eagles so successful where maybe your team isn’t? Well, probably because JCHS develops interior offensive linemen like Cameron Willis.

You always hear about the “5-foot-nothing,” 200 pound, “mean as Hell,” wonder-lineman who, in spite of his frame, somehow not only gets the job done, but gets it done exceedingly well. Regardless of whether or not they are college prospects, high school football has thrived on them since its dawning and they will live forever stitched into the very fabric of its folklore. KPGFootball would hold up Willis as an excellent example of what you may have before believed to be the stuff of either legend or myth. We believe there is a “Sasquatch,” for instance; but we know, darn well, there’s a Willis. We’ve seen him play.

Cameron Willis is 5-8 and weighs in around the 200-pound mark. He has excellent pad level and the core strength to enable his getting under bigger linemen and digging them out of the area where the play is designed to proceed with the same type “superior leverage” he demonstrates on the wrestling mat.

Willis has always been an accomplished weight lifter. We don’t have any recent power numbers for him, but remember him benching nearly 275, and squatting more than 4 plates (405 pounds), the summer before he enrolled in Johnson Central High School. We have no reason to believe he has gotten any weaker. In fact, common sense tells us he has strengthened considerably as he has matured.

KPGFootball has but an inkling of how successful JCHS figures to be in 2019, especially with heavyweights from the 3A Classification, like Central (Louisville) and Boyle County, joining the classification. We know the Eagles have a tremendous amount of talent in its 2020 (Devin Johnson), 2021 (Cameron Willis, Hunter Scott, Zach Russell), and 2022 (Owen LeMaster, Keygan Pelfrey) graduating classes. We know this because we have either featured or designated each of the players, above parenthetically referenced, on one of our underclassmen All-State teams.

One thing is certain, a team which relies so heavily on ground production (5,393 yards rushing in 573 carries), is going to need some stability along its offensive line. It is going to need a “steadying hand.” Aaron Snyder, writing for the Daily Independent, predicted Cameron Willis would emerge, one day, as one of the steadying hands for JCHS up front in an article he caused to be published on August 17, 2018. Is he on the very ledge of letter-perfect clairvoyance?

Well, from where we sit, Mr. Snyder may be the Nostradamus of the Mountains. We believe the time of emergence is here and the “steadying hand” will be that of Cameron Willis, in 2019 and beyond. Only time will tell for sure. KPGFootball supposes we all shall soon see.