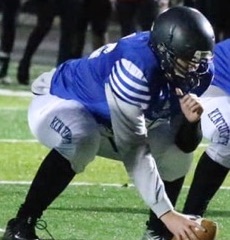 Alright, this article is particularly directed at all the 2023 guys who will be coming up into a high school program this next year. KPGFootball earnestly hopes you aren’t waiting around for an engraved invite to the program’s weight room. The reason why..because some of you are just too good to not be pressed into early service. KPGFootball will start off with an anecdote.

There is a father, we know, whose son is a former “Team Kentucky” standout from nearly three years ago. The event we are describing would have happened the spring semester of 2017 during the 2016-17 school year. Well, anyway, this father received a phone call from the head coach for whom his son was set to play the Fall of 2017. The coach had just been hired at the high school and, apparently, wanted to “set the record straight” about a few things.

According to what we were told, the gist of the phone call was this coach’s assurance to this father there was absolutely “no way on God’s green earth” that father’s son would see “even a snap of varsity action” in his forthcoming freshman season. The father told us the coach just kept re-iterating he didn’t play freshmen. We asked the father for his response? This is what he told KPGFootball.

“I just agreed with the coach, assuring him I didn’t have any expectation my son would play on Friday nights, and hung up the phone. Then, I looked at my son,” said the Father to us, “and told him, ‘Son, don’t you EVER let any freaking football coach, at any level, tell you whether or not you are going to be in the lineup. That is your decision, son, whether you play; your’s and your’s alone. Go in that weight room and work on your strength, power, speed, quickness, agility and explosion and don’t come out until you have left him no choice regarding whether you play.'”

KPGFootball agrees with every word that father told his son. The father was right. Coaches, foremost, want to win. Frankly, if they make a habit of losing, they are (and deservedly) unemployed. It’s a “results oriented” world and football is a “results oriented” game. If a player consistently fails to perform his job, on the field, he is fired. If the product the coach puts on the field stinks…so is he.

Well, there is a very good player out there in Barbourville, Kentucky who intends to make the decision, for himself, about whether he sees the lineup. His name is Bracken Castle. You probably have heard of him and, if you haven’t, you must never read KPGFootball as we have sung his praises.

Bracken Castle made our inaugural middle school All-State Football Team at offensive center. He then immediately was selected to Kentucky’s elite “Team Kentucky, FBU” national championship contending squad, where he also started at offensive center. He is a “bone fide,” middle school, star football player. Does this mean he will be a star in high school? Well, truthfully, in about 90% of instances…that’s exactly what that means.

Bracken has been gifted by The Almighty with an ideal interior OL frame at 6-2 and 270 pounds. Bracken has also been working on his feet, doing extra agilities, and running the rungs of the rope latter after his weight lifting. Basically, he’s out there working. If you hope to play ahead of Bracken, all you upperclassmen in Barbourville, Kentucky, we hope the same can be said of you.

We will be the first to tell you Bracken isn’t quite there, yet, regarding the strength and power numbers it takes to play varsity football at a school like Knox Central (10-4, in 2018, Class 4A Semi-finalist). Bracken needs to come into Fall with his bench press at or above 250 pounds, his squat at a minimum of four plates (405 pounds), and a power-clean between 215 and 225 pounds. Should he arrive as described, with the footwork, agility, and frame he already possesses, it will be nearly impossible for him not to make the O-Line’s “first five.”

Here’s the main thrust of why this article is being published today. Football is the world’s greatest game because a lot of what it takes to succeed is well within your control. You can decide you want to be a football star and then go out and make it happen with old-fashioned hard work. While one can’t make oneself tall; one can make oneself strong, powerful, fast(er), quick, agile, and explosive. Strong, powerful, fast(er), quick, agile, and explosive people always find the lineup on Friday nights. Make yourself all of those things and you will too.

Get to work, 2023! Many of your brethren are already out there busting their humps. Don’t fall too far behind now!