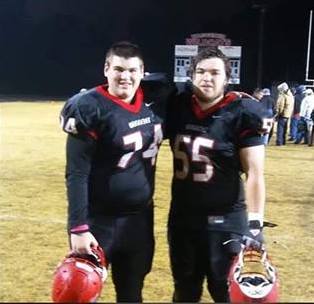 Judging by the fact that 20 either present or past KPGFootball underclassmen All-Staters were selected or honorably mentioned on the 2018 AP Kentucky All-State team, it would appear the press corp (at the very least) is pretty impressed with KPGFootball’s eye for talent. His name is Mudd…John Mudd, a.k.a “Trey,” a.k.a. “Big John.”

John Mudd, while playing tackle at Waggener, is a definite college prospect at any of the three interior offensive line positions with his present 6-2, 298 pound frame. Working with the premier trainer in Kentucky, Chris Vaughn, John is a “near-300-pounder” who is solidly (and not the least bit sloppily) constructed.

John started 9 of the team’s 12 games at offensive tackle in 2017, though only a freshman at the time. While his team was 5-7, there is something to be said about a team which, though losing overall, did make the 2nd round of the KHSAA playoffs before losing to 3A powerhouse Belfry. The KPGFootball selection committee rewarded his play with selection to our freshman team at the end of the year.

In 2018, John Mudd started every game, up front, for Waggener High School as the Wildcats improved to 8-4 in 2018. John Mudd is one of the most physically imposing and skilled front line players in Kentucky’s Class of 2021 and John helped open holes for Waggoner’s 1,000 yard rusher, Branden Jones, while playing consistently at an All-State level. Naturally, our selection committee, once again, rewarded the big fella’s play with selection to our sophomore team at year’s end.

So, why does Mudd keep gaining selection to our underclassmen All-State teams? Why is he an early favorite for selection to either the Coach’s or AP’s, 2019, All-State football teams? Well, for one, Mudd has excellent get off, firing off the line of scrimmage, both low and hard. Secondly, Mudd plays with excellent pad level through-out engagement with first and even second level defenders. Third, Mudd runs his feet well and stays on his blocks well into the second, and sometimes third, levels. Finally, these are all attributes noticeable in only the elite of players aligned across an offensive front, especially at the high school level in Kentucky.

John Mudd is a well known name in football circles among pundits composing lists or participating in the listing of 2021’s best Kentucky high school football players. We don’t believe that to be by accident. We are big fans of “Big John” Mudd.

At KPGFootball we can’t help but think of the famous Jimmy Dean recorded song Big Bad John when thinking of Mudd. A particular verse comes to mind from the song where Dean sings…

Through the dust and the smoke of this man made hell
Walked a giant of a man that the miners knew well
Grabbed a saggin’ timber, gave out with a groan
And like a giant Oak tree, he just stood there alone, Big John…

Now we aren’t trying to equate playing offensive tackle to rescuing a bunch of miners from a caved-in coal shaft, as the song memorializes in the above lyrical verse. That would be a false-equivalency. However, there are some similarities.

John Mudd puts on his hard-hat and goes to work, each and every day, much like the coal-miners depicted in the Jimmy Dean song and particularly Dean’s Big Bad John. Also, like that John, this John (particularly as he continues to work with Vaughn) gets increasingly broad at the shoulders and narrow at the hip.

If we are continuing in the false equivalency above set forth, this Big John, like Jimmy Dean’s Big Bad John, stands alone like a Giant Oak Tree among the other offensive tackles in the 2021 graduating class. There is little doubt to KPGFootball you will continue to hear the legend spread about our Big John, like it has Dean’s Big Bad John. Hell, who knows, maybe we’ll just write a song about our Big John. With the way he has played thus far, we would sell a few copies around Louisville.